Latest News
Ark Desmodus: What Is It And Where To...
When Is Ark’s Fjordur Map Coming Out
Planet Zoo Wetlands Animal Pack DLC
Animal Crossing: New Horizons Bunny Day 2022
ARK: Survival Evolved Eggcellent Adventure 7
Ark Love Evolved 3
The Best Survival Games Coming Out in 2022
Night of the Dead’s January Update Adds New...
What is Nookazon and How Does it Work?
The Best Of the Steam Winter Sale 2021
Reviews > Workshop Simulator Review

If you’re a fan of relaxing simulator games, you can’t get much more chilled than Workshop Simulator, as you tend to your late Grandfather’s home, take on commissions and help your Grandmother by renovating items around the house and on the land.

Many of these games tend to focus on ultra-realism, hunting down every pixel when painting an object, but thankfully, in keeping with the more relaxed theme, Workshop Simulator has opted for a more chilled and forgiving gameplay, autocompleting certain tasks, without the need to zoom in and go pixel hunting.

What is Workshop Simulator About?

You don’t normally expect to see a backstory in these types of simulator games, Ranch Sim being a good example of this, where you just jump into the game, but surprisingly, Workshop Simulator does have a backstory behind it.

You start the game as a child, playing outside in your Grandfather’s house, but before long you throw your toy plane, which hits the porch, smashing it into pieces. Thankfully, your Grandfather is close by, and ready to teach you how to fix the plane yourself, starting your journey renovating commissioned items.

As you fix your toy plane, your Grandfather walks you through the process step-by-step, acting as a tutorial to help you learn the ropes and prepare you to take on jobs as an adult.

Once you have finished fixing the plane, the game jumps into a cutscene, where you learn that your Grandfather passes away. Before long you are back at his house, looking after the place for your Grandmother and taking on workshop jobs of your own.

While the premise of a relaxing simulator game is always welcomed, there is an overwhelming sense of simplicity to the game. There’s only so much pulling out nails or screws, washing, sanding and painting you can do, before a game becomes repetitive.

Even with some of the larger items with hundreds of parts, you still feel like you are doing the same thing over and over again, which is a shame, as Workshop Simulator has real promise to be a great simulator.

Don’t get me wrong, sanding the rust of a piece of metal is oddly satisfying the first few times, but even with the upgraded equipment, it quickly becomes dull and repetitive.

The other issue with Workshop Simulator is the lack of creative freedom. For example, even with the upgraded paint booth pictured below, which you pay for as an upgrade, you still only have a handful of colors to choose from. Had the developers included an unlimited color pallet, stencils and some other features, this could have been so much more interesting.

Workshop Simulator is still in it’s infancy, hopefully we will see future updates add some more creative ways to allow players some more freedom when playing, but sadly, until then, you might find the game a little repetitive.

Workshop Simulator has tons of potential to be a great game. It also has the potential to allow players to explore their creative sides, but sadly it falls short due to it’s lack of unique content.

On the first few days of playing I encountered tons of game breaking bugs, but in fairness to the developers, these bugs seem to have been patched out fairly quickly, allowing me to get back to washing, sanding and painting in no time.

If you’re searching for a simple simulator game that doesn’t require too much thought, Workshop Simulator may be the type of game you’re after. But, if you want something more exciting, it might be worth waiting until Workshop Simulator adds more content. 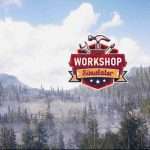