Fatshark took the Warhammer series by storm when it released Warhammer: Vermintide 2 back in 2018. In 2019, Winds of Magic was released as a Vermintide 2 DLC which offered players new campaigns.

Following its predecessors Shadows over Bögenhafen and Back to Ubersreik, is Winds of Magic worth the investment in another Vermintide 2 DLC?

The Story So Far

Possibly one of the most anticipated aspects of Winds of Magic was the introduction of Beastmen. As Reikland gets hit by a large meteor, these beasts clamber out of the forest to claim the epicenter as their Herdstone.

It’s up to the five heroes of Vermintide 2 to stop them in their tracks.

We’ve had a meteor crash down, with all the usual death, destruction and creepy-crawlies coming out of the woodwork. My thumbs are prickling about this one. We can’t leave it alone, that’s for sure. Time to do your thing.

As the heroes get nearer to the crash site, they quickly discover a new campsite named Skaven. Those responsible for this unknown site are the Beastmen.

Along with the mission, the Winds of Magic DLC offers the following locations to explore:

Who are The Beastmen?

Resembling that of a humanoid, the Beastmen display a bestial appearance. The color of their hide and horn size represents their status in society. Even at full size, those with smaller horns are considered lesser beasts.

In Winds of Magic, you’ll find different types of Beastmen, including:

Winds of Magic Level Up

The Winds of Magic DLC boosts the level cap from 30 to 35. A minor boost, but a boost nonetheless. When you reach level 30, you can choose an additional talent.

While the increased level cap is nice, it didn’t feel like it made that much of a difference; at least not that of a fresh DLC.

In addition to the level cap, Winds of Magic introduces one new map in the expansion. Unlike previous DLCs, this felt pretty deflating.

Weaving In and Out

Winds of Magic offers up a new game mode known as Weaves. Players must complete Weaves of the Eight Winds of Magic with weave-forged weapons. Sounds exciting?

This game mode doesn’t allow you to bring any of your existing equipment or talents along for the ride. Instead, you’ll start from scratch and unlock your set as you go.

Although it seems like an interesting concept on the surface, it didn’t feel very well thought out. In fact, I might be tempted to call it lazy. Given the latest Steam reviews, I don’t think I’m on my own on this one.

In honesty, Winds of Magic felt like it was trying to be something it’s not. The leaderboards felt completely out of place for a Warhammer game, especially considering you can’t tackle any of the challenges with your CPU allies.

The only way to progress along the Weave chart is to find other random team members that are trying to complete the same Weave level.

You might think that would be easy, like joining an instance in WoW. Nope, it’s an unbearable process that doesn’t offer any intuition and frankly, I found it frustrating.

As a fan of the Vermintide games, Fatshark didn’t fulfill my fantasies this time.

The entire expansion felt unnecessary, and I really hope they don’t make the same mistakes again. 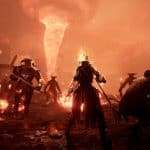 Winds of Magic is one of the Vermintide 2 DLCs. With previous DLC success, Winds of Magic didn't quite hit the mark and instead offered a boring singular map and frustrating new game mode.