Developed by Toyful Games, Very Very Valet invites up to four players to take control of a valet service. Played best with friends, you’ll need to be strategic in parking cars and returning them to their owners.

If you’re a fan of co-op and casual games, Very Very Valet is sure to bring some chaotic excitement to your couch.

Ultimately, your mission is to take a car and park it anywhere to avoid a severe parking crisis. Playing as a puppet valet character, you and your friends will be racing against the clock to satisfy customers.

Very Very Valet is available on Nintendo Switch from May 25th, retailing at $29.99.

While it may seem a bit of a nonsense game, there is actually an element of skill to becoming a valet in Very Very Valet. Although there’s a “no license required” stamp to the game, players will have to uncover hidden techniques to master the controls.

You can valet solo or with up to three other players. You’ll need to assist each other to become the best valet in town.

With over 20 unique levels, you’ll be taken to a variety of locations. These include city streets, bowling alleys, trainyards, and more.

In Very Very Valet you can throw professionalism out of the window. It’s time to get in the driving seat and park those cars anywhere to beat the time.

Is It Worth It?

At the time of writing, the game has 20 unique levels. While these can be hard to master, there’s ultimately only so much you can do.

If you’re looking for a fun game to play with friends, why not try your luck at this frantic valet service game? The price tag does seem a little steep, personally, but there’s definitely a good chunk of gameplay on offer.

Finding a co-op game on the Switch can be like finding a needle in a haystack. This game has brought lots of laughter (and frustration) but is a worthwhile investment if you’re looking for something to do with your friends. 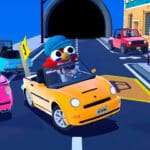 Very Very Valet is a casual and fun co-op game, best played with friends. You'll need to work together in a race against time to pick up valet requests, park cars, and return them (mostly) safely to their owners.