With Two Point Hospital being such a huge success, I’ve been eagerly awaiting the continuation of the Two Point game series, with the latest entry, Two Point Campus.

This time, instead of focusing on running a hospital, and supporting patients with all types of crazy fictional ailments, players focus on running a university, with equal amounts of humor and craziness.

While the focus might have moved away from saving lives, and now focuses on shaping young lives, those who played Two Point Hospital should be able to hit the ground running.

There are 12 levels to work through, each with its own unique courses and buildings. But I suspect, much like Two Point Hospital, this will grow as more DLC is released, bringing with it not only new maps but also more whacky courses for your students to enroll in.

Two Point Campus does feature a sandbox mode, but it requires you to get at least one star on the fourth map Noblestead before you can play it.

Of course one of the most popular aspects of Two Point Hospital is the PA announcements, such as “Attention! Don’t feed the ghosts, they’re dead. Thank you”.

Thankfully, our foul-tempered sarcastic PA is back in full force in Two Point Campus, but sadly her quippy antics just aren’t quite as funny this time around.

Two Point radio is back too, but this time some of the students have taken to the airwaves to add some important announcements to the campus, such as warning students of the smelly cheese loose in the bathroom.

Although Two Point Campus has clearly paid extra attention to detail to ensure it’s not a game to be taken seriously, it just doesn’t quite hit the mark that Two Point Hospital did.

Two Point Campus is all about raising students’ grades and making as much money as possible. To do this, you need to make sure that your students are happy, and that their needs are being met.

As you would expect from university students, much of this centers around making sure they are entertained and are able to form solid friendships.

Building arcade machines and other entertaining items around the university can not only be a great way of bringing in more revenue but can also help keep your students happy.

Or if you really want to raise the bar, you can organize an event at the Student Union, because let’s face it, it’s partying that produces better grades, not studying, right?

Of course, being a Two Point game, don’t expect many serious courses. There are plenty of ridiculous courses such as Knight School, Wizardry, and Funny Business.

Here is a full list of the courses you can currently see in Two Point Campus:

While you can host multiple courses at each of your campus sites, each site has its own unique theme which follows one of the courses. For example, there’s the Noblestead school which focuses on teaching Knight School and is taught within an old English style castle, perfect for learning to become a knight.

Many of the courses, such as Academic Exercise require outside educational facilities, offering a much more interesting format than Two Point Hospital which only had rooms inside the hospital.

Building a Cheeseball Field certainly makes the game much more interesting, instead of simply building rooms inside. You get much more of a sense of creativity being able to build both inside and outside facilities.

It’s Just Not Quite As Good

No matter if you’re new to Two Point games or not, Two Point Campus is an absolute delight, offering hours of fun, laughs, and plenty of ways to get creative. However, if you were expecting something on-par with Two Point Hospital when Two Point Campus was announced, you may feel slightly disappointed.

Managing your campus does involve a level of micro-management, but nothing that causes the game to not be enjoyable, simply ensuring that the university runs smoothly can be done fairly easily, letting you focus on creating the perfect campus.

Much like Two Point Hospital, each new campus you unlock does a great job of throwing something new at you. This keeps the game fresh, and even once you complete the campaign the Sandbox offers new ways to enjoy the game and keep the fun going.

As a game in its own right, or for players that haven’t yet experienced Two Point Hospital, Two Point Campus is definitely worth playing. But, for seasoned players of the Two Point series, it’s hard not to compare it to its predecessor. 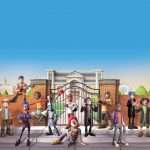