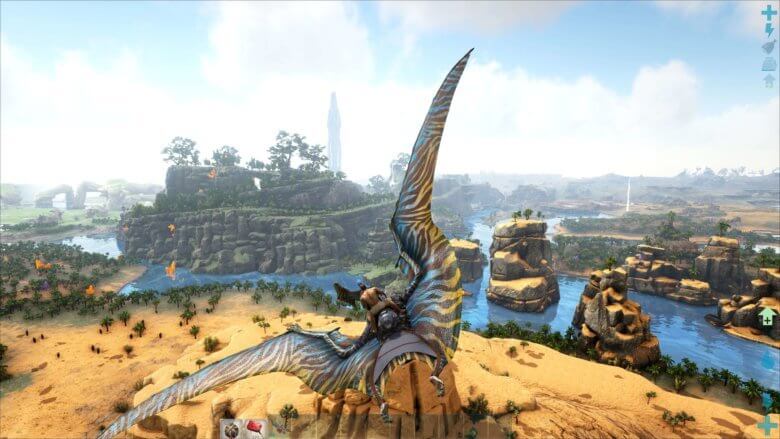 The Tropeognathus is one of the most recent dinosaurs to be added to Ark. You’ll find it over on the new Ark: Crystal Isles DLC, along with a few surprises. We’ve compiled a list of Tropeo Controls for PS4 to help you get to grips with using the new ark dino.

The Tropeognathus requires a saddle, unlike anything you may have come across so far on Ark. The saddle comes equipped with a flak cannon on its back, and a super-powered jet engine behind.

The Tropeo saddle can be made by a player who is level 65 or above. It will cost 21 engram points and can be crafted in the Fabricator, Tek replicator, or Refining forge, using the following materials:

When a player mounts the Tropeognathus with a saddle, they will be able to activate the Jet (requires Gasoline). When the jet is active, players can choose from 3 speed settings, each using more gasoline as the speed scales up.

If that wasn’t enough, the Tropeo can barrel-roll (much like the Pteranodon). This is a super-useful feature if you want to evade attacks from players or other dinosaurs.

To use the flak cannon, players will need to use Grenades by placing them in the Tropeo’s inventory.

If you want to spawn a Tropeognathus into your game using the admin spawn commands on PS4, here’s how to do it.

Use the primary attack button while jet boosted to fire grenades.

Using Tropeognathus as a grinder

The Tropeo isn’t just a great transport and raiding dinosaur, it also has productivity uses too.

Tropeo’s can be used as mobile grinder and have the ability to grind a wide variety of items, for PVP servers, this will mean the Tropeo will be able to grind down much of what you might normally leave, down to base components, ensuring you make the most out of your raids.

Written by
Georgie
Co-Founder of unboxedreviews.com - Georgie is a freelance Content Writer specialising in gaming news, reviews, and technology. Georgie enjoys stealth, survival and RPG games. She loves penguins, unicorns and anything that sparkles!