Sheltered 2 is the sequel to the popular strategy game from veteran publishers Team17, the game resembles Fallout Shelter, This War of Mine, and other bunker-building, resource management games that have become a regular occurrence in the world of gaming these days.

These days so many sequels simply look or behave like expansions or DLC’s, offering little in new mechanics and simply expanding on what was already there, thankfully, this is not the case with Sheltered 2, which has managed to expand on the originals game with some cool new features.

Factions are the biggest change to Sheltered 2, when you first start the game, you must create the leader of your own faction, and build up your faction to survive.

Once your base is built up enough and your faction is ready, you can now make contact with other factions, whether that be to forge alliances and trade with other factions, or take a stronger approach, dominating them and forcefully taking them down with the new and expanded combat system.

With the new faction system also comes negotiations, it might be the end of the world, but civilized diplomacy isn’t dead, and if negotiations don’t work, you’ve always got your handy homemade weapons to cut diplomacy short.

If you’re like me, you will love a good challenge, and nothing is harder than a good permadeath mode, in which the leader of your faction is more important than ever, if they die, well, it’s ‘game over man, game over.’

Although, as much as I do like a challenge, Sheltered 2 is hard enough already, with the constant battle to keep resources stocked up, keep everyone safe, scavenging, and generally not dying, things are already pretty tough as it is.

The level of customization in Sheltered review is quite impressive, with the ability to truly make your survivors within your faction unique.

Each survivor has their own personality, traits, and skills that can be developed through the game by performing different tasks within the factions bunker.

Sheltered 2 is split between two types of gameplay, there’s the base building and resource management side, but also the surface-based exploration and faction negotiations side.

Exploring the Surface of Sheltered 2

Near the start of Sheltered 2, the tutorial will have you lead an expedition outside of the bunker, looking for supplies to help strengthen your survivor’s home.

When you are out and about, you will inevitably have to cross into other factions’ territories, doing so can end in conflict depending on your standing with that faction.

In some cases you will get dialog options, that will allow you to try and work with the faction that you have stumbled upon, this might end up going well for you, or could end up in combat, this depends on the faction as well as your responses to them.

While getting out and about exploring and scavenging for supplies can be a dangerous endeavor, very often the rewards are worth the risk, so it pays to make sure you send the right people out, with good enough gear to survive should they encounter a fight.

Building Your Shelter in Sheltered 2

Once you’ve managed to obtain enough supplies, it’s time to focus on securing things closer to home and looking after the needs of your survivors.

The building aspects of Sheltered are very similar to games such as This War of Mine and Fallout Shelter, the vast majority of objects serve a purpose to help keep your survivors alive and make production move quicker.

While I did enjoy the building aspect of Sheltered 2, I felt that the factions and exploration parts are the game were where I enjoyed myself the most, but Sheltered 2 just doesn’t do enough to separate the building side of the game from other similar games.

After a while, once your factions base has grown, it can become boring grinding items to continuously keep improving the settlement, and the continual need to repair items all the time.

I didn’t hate the building aspect of Sheltered 2 at all, I just felt that there were a few tweaks needed, and something was missing, something that could have taken this game’s potential and made it into something great, or at least better than it is now.

The building aspect of Sheltered 2 isn’t groundbreaking or anything I’ve never seen before, it’s the exploration and factions side of Sheltered 2 where the game shines brightest.

Having other permanent named groups, or factions, that are a constant threat that really makes the game much more interesting, especially compared with the original title.

There is also an element of Sims style gameplay with Sheltered 2 as well, with training survivors using punchbags or other objects to increase their skills, watching and helping survivors grow can become fairly addictive. 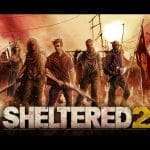 Buy Now
Game title : Sheltered 2
Game description : Survive in a post-apocalyptic world, working together with your faction, to expand your base, making it self-sufficient, and eventually working with, or fighting other factions to survive.
Unboxed Reviews