Released on March 4th, 2021, Ranch Simulator is available to purchase on Steam. If you love simulation games like Farming Simulator but are looking to get more hands-on, Ranch Sim may just be the ticket.

Developed by Toxic Dog, Ranch Sim allows you to manage, harvest, hunt, and build your own farm. You can play Ranch Sim as a single-player game, or invite your friends for some co-op management sandbox fun.

What was once your grandfather’s pride and joy is now a dilapidated homestead. It’s your job to turn things around and make what was once a bustling and thriving ranch, great again!

You can work on your own to restore your family’s ranch, or play in four-player co-op multiplayer. While many people may consider this just another simulation game, I found the story sucked me straight in. I felt a sense of pride and wanted to jump in to find out more.

Ranch Simulator is so much more than just a farm simulator. From single to co-op gameplay, choosing how you want to make money in Ranch Sim, and whether you want to slaughter your livestock (it’s really hard to do this when your chickens are happily clucking away).

I honestly wasn’t sure what to expect from Ranch Sim. I launched the game and was pleased to find a character creation screen.

You can customize your character in great detail, starting with the option of 10 presets. You can choose between male and female characters and can further customize the following:

If you don’t have time to create a character, or simply don’t want to, you can also randomize a Ranch Sim character to get started with the game quickly.

Starting the game was fun. While the tutorial sets you up with how to play the game, it didn’t feel laborious at all. In fact, I found it taught you the basics without placing too many restrictions on what you can interact with. The initial questline takes around 10 minutes to complete and is an essential part of understanding where things are (like the shops), and how to get started on rebuilding your ranch.

Without giving too much away, your first task is to build your vehicle so that you can travel around the vast map. This part of the quest teaches you how to pick up objects and place them, which seemed fairly intuitive. The controls were a little tricky to get used to (more so because of the types of games I play), but it wasn’t difficult to get to grips with.

I was genuinely taken aback by the graphics in Ranch Sim. I’m not sure what I was expecting, but it certainly wasn’t the level of detail that the game produced. While Ranch Sim isn’t too taxing on your machine, you will need the following minimum requirements to play:

The game ran like a dream on my PC, which made me even more determined to complete the tutorial so I could get my hands on some livestock. Honestly, the chickens are really cute, and even more so their chicks!

Initiating a multiplayer game is easy to do, but I must admit it wasn’t as intuitive as I initially thought. In order to play Ranch Sim with your friends, you’ll need to start the game in single-player and invite them once you’re in the game.

When you’re in the game, simply navigate to the main menu by pressing the ESC key. Here you’ll see the option to Invite Friend which will launch the Steam Friends pop-up. Once you’ve selected a friend to invite, they’ll get a notification on their Steam account to join you.

Note: Your friends will need to create a character before being able to join you.

Once your friends accept your invite, they’ll join your game and you’ll be able to work on quests together. For example, if you need to place 4 wheels on your vehicle, you can all pick up the required objects to work towards the same goal.

Now we get into the exciting part of the game (well, it is for me anyway). Part of the tutorial quest takes you over to the store where you can purchase tools and livestock.

You’ll be able to see your total household balance, and the total amount in your cart. The tutorial asks you to purchase 2 chickens as well as some tools to get started. What I didn’t realize was that once you had purchased your items from the shop, you had to physically pick them up for them to appear in your inventory.

The tools were easy, as they get packed away, but the chickens need to be physically picked up and placed in the back of your vehicle. If you’ve ever played Tetris, you’ll need to put your skills to work to ensure you can fit everything in the back of truck.

Once you get back to your ranch, you can start rebuilding your homestead. Granted, I’m not sure you should pick up a chicken like this, but it was amusing either way.

When the tutorial has been completed, you’ll need to manage your ranch, including your livestock, to ensure you make a profit. You’ll need to feed and water them regularly, breed them, and rear them so that you have more produce to sell.

When you’re ready to take on more than just managing your farm, you can go out on the hunt. The open-world environment was a joy to explore, with plenty of wildlife to admire. Be careful though, as it’s not all fun and games – there are bears out there, so you’ll need to take your trusty (I mean, rusty) rifle to protect yourself.

Don’t get too complacent though, because your ranch won’t run itself. Yep, as well as bears, there are hungry wolves ready to chomp on your livestock, so if you’re playing multiplayer, it’s worth keeping someone at home to ensure your pigs aren’t turned into pork chops sooner than you had hoped.

Ranch Sim was a pleasant surprise and a welcome one at a time where great simulation games are lacking. I must admit, I had way more fun playing Ranch Simulator than I initially imagined. You could easily sink a good few hours into making your chicken coops and barns.

If you’re playing on your own, be prepared for the long haul. Things take a while in this game, including unloading meat and wood from your truck. While there’s plenty of potential left to unlock, I very much hope that Ranch Simulator Early Access continues to receive regular updates and offer more gameplay in the future. 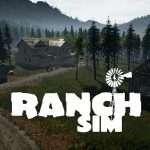 Buy Now
Game title : Ranch Sim
URL : https://www.excalibur-games.com/ranch-simulator/
Game description : Ranch Sim is a casual simulator game where you have been given the reins to restore your family's ranch to its former glory. Buy chickens, sell eggs, shoot wildlife, and roam the vast landscape in solo or multiplayer.
Unboxed Reviews

how to get session id?

Hi Jarin! A user can find their Session ID by loading up an existing game then pressing ESC. In the top left-hand corner, you’ll see “Session ID”. Click the eye icon to reveal the ID. Any users wishing to join your session will need to select “Connect” from the menu you see when loading up the game.

Hello.
Played the game for a while now, absolutely love it, but….. Lately I get kicked out of the game after a few minutes (i used to play for hours). I tried turning down the graphics, did not work. Then I made the mistake of un- and reinstall the game, losing all my progress in the process, my bad. Is everything lost or can I somehow get my former game back and do you have any idea why the game keeps crashing? I have a strong graphics card and other heavy games run perfectly so that cant be it, I think. Thanks.