With the recent release of the latest next-gen consoles, it’s only natural to expect that we would start seeing next-gen accessories. Sony’s Pulse 3D headset takes audio to the next level.

The PS5 features a new technology called the Tempest Engine. This does all the hard work of bringing ultra-realistic 3D audio to your console.

But, at the time of writing, the Pulse 3D headset is the only wireless headset able to fully take advantage of the PS5’s 3D audio.

Essentially, this means if you want to make the most out of your PS5, you’ll need to invest in a Pulse 3D headset. This will set you back $99.99, but we’re going to tell you why it’s totally worth it.

The PS5 itself has a pretty controversial design. When the initial designs were leaked it was heavily mocked online, with many people comparing it to a Linksys router.

The Pulse 3D headset follows the same design as the PS5. If you’re not a fan of the console, you might not like the looks of the headset.

However, I would personally say that the headset does look better than the console. Unless you’re listening to music via your smartphone with your Pulse 3D headset on, aesthetics shouldn’t deter you from what it has to offer. Alternatively, Sony recently released a Midnight Black version of the Pulse 3D Headset which looks less like the PS5.

One of my biggest issues with surround sound headphones is that they seem to either be too tight or not tight enough. But the Pulse 3D headset does seem to get the pressure just right.

It blocks out external sounds, whilst not being so tight it becomes annoying after wearing the headset for a long time.

The headset can feel a little flimsy, with its fully plastic band. But for an immersive 3D headset that offers exemplary 3D audio, you can’t complain considering their relatively low price.

Purchasing the Playstation Pulse 3D Headset was an impulse buy for me, and most of the time my impulse buys end up in disappointment, but this wasn’t one of them.

Testing the Pulse 3D headset on Returnal, a game that has been designed with 3D audio in mind absolutely blew my socks off. I’ve tested 3D before, but for me, this took the experience to the next level.

I could hear the exact direction of where sounds were coming from, how far away they are, as well as ambient sounds echoing through the headset.

While I have previously experienced similar on my PC, this is the first time I have ever heard such quality 3D sound coming from a wireless accessory on a gaming console.

Even games that hadn’t specifically been designed to take advantage of these headphones sound amazing, Spider Man: Miles Morales, swinging from building to building has never sounded so incredible.

With a rechargeable battery, the Pulse 3D Headset allows you to enjoy an immersive experience for up to 12 hours. You can easily set up the headset with your PS4 or PS5 using the included wireless adapter.

However, it also has a 3.5mm audio jack meaning you can connect your headset to the PS5’s DualShock controller when you run out of battery.

Being versatile, the Pulse 3D Headset can connect to other audio sources, and it can be used with PS4 consoles. While you won’t get the best experience out of this headset by connecting it to a PS4, it does mean you don’t have to buy additional accessories if you choose to swap and change between consoles.

Don’t be fooled by the cheap price, and the plastic design. The Sony PlayStation 5 Pulse 3D Headset is one of the best 3D audio devices that I have ever used on a console.

While that may be partially down to the PS5’s amazing sound technology, having previously tested the difference with a wired headset attached to the DualSense controller, I can certainly tell the quality upgrade that comes with this headset.

As this is currently the only 3D headset to work with full compatibility with Sony’s 3D audio for the PS5, there are no other choices for an alternative headset.

While this is something that would normally bother me, Sony has done such a great job here, I’m not sure you would need anything else.

The Pulse 3D headset has a battery life of around 12 hours, which isn’t massive for wireless headphones but will easily cover a solid gaming session.

They can also be used wired too, so if you forget to charge them, it’s not an issue, simply plug them in and carry on your gaming session in surround sound.

The only real downside to the 3D Pulse is the microphone, which seems to easily pick up background noises, instead of blocking them out, as most modern headsets would. 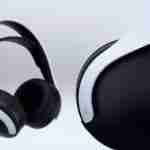