This time players are treated to eight new incredible animals, including the armadillo, blue wildebeest, emu, and many more, but for me, the most exciting new creature added with the Grassland Animals Pack is the five species of butterflies.

Instead of simply putting butterflies in an exhibit, zookeepers can now create their very own walkthrough butterfly enclosures. For me, this is one of the most exciting new features for Planet Zoo in a long time.

Creating a walkthrough exhibit for flying insects already makes the Grassland Animals Pack one of the best DLCs Planet Zoo has produced to date, and lets players unleash their creativity in a whole new way. Watching butterflies land on guests is also another nice little touch.

The Grassland Pack takes players to the grasslands of Argentina to teach Tiffany Summers how to properly take care of the animals she currently holds in her mansion. Of course, being a rich socialite, we’re really saving them from her love of dressing them up like fashion models, and stressing them out.

You’ll need to relocate the animals to better surroundings while, in the meantime, trying to get her a permit so she can legally keep them, although with her trying to feed them caviar, perhaps they’re better off in the zoo?

The goals for the campaign are fairly simple, but with the new species and awesome grassland setting, makes for some fun gameplay.

To complete the campaign with a bronze star you will need to:

These aren’t the most difficult campaign missions to complete, but they’re a great way to learn how to build a butterfly walkthrough and experience some of the new awesome animals.

With the Planet Zoo Grassland Animals Pack adding more animals than any other Planet Zoo animal pack before it, if you’re looking to expand your zoo, this pack offers incredible value for money.

With the addition of walkthrough butterfly exhibits, even veteran builders will be in for a challenge designing a detailed exhibit with hanging baskets and other new scenery items.

While the butterflies might have stole the show here with this animal pack, it’s undeniable that the other animals included in the pack makes this one of the best animal packs Frontier have released to date.

The full list of new animals, including all species of butterfly:

As always the new Grasslands Animal Pack has been released alongside a free Planet Zoo update, giving players new features, such as the new guided tours, helping players to educate guests as they explore your zoo.

As well as the new guided tours the free update also added new features such as the new Diorama game mode, the bulldozer delete tool, habitat heatmaps and much more, including various bug fixes.

If you’re planning to pickup a new animal pack for Planet Zoo, I highly recommend the Planet Zoo Grassland Animals Pack. With a perfect selection of animals, new features and a great campaign, it’s easily the best animal pack released so far, giving players the opportunity to create some truly unique enclosures in their zoo. 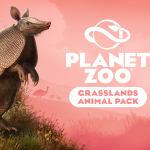