With every Planet Zoo DLC, players are excited to learn of the new animals they are able to add to their zoos. Included in the Europe Pack you’ll meet:

While undoubtedly you’ll be excited for the new animals with this DLC, there are also over 250 new scenery pieces to play with. These are inspired by European countries such as Italy, France, Germany, Switzerland, and many more.

The Planet Zoo Europe Pack DLC only adds to the game’s stunning ability to create beautiful parks. Whether you enjoy theming your areas into separate categories, or love playing with the construction items, Frontier has hit the nail on the head once again.

Included with the Europe Pack DLC, there’s a new timed scenario that is set in the foothills of an alpine mountain. You’ll need to build across three themed areas to complete the challenge.

In addition, players will need to have at least 20 different habitat species, maintain animal welfare, invite at least 3,000 guests to your zoo, and earn a tidy yearly profit of 18,000.

While some Planet Zoo enthusiasts may feel disheartened to learn many of these tasks are already established, it’s still a massive challenge to overcome.

When Can You Play Planet Zoo Europe Pack DLC?

The DLC is available to purchase via Steam for $9.99 (£7.99, 9.99€) from today – 14 December. Keep your eyes peeled, because we will be introducing plenty of new Planet Zoo tips and tricks, guides, and how to build the perfect restaurant for your zoo.

And of course, we expect there to be an abundance of new Steam Workshop content available to subscribe to. 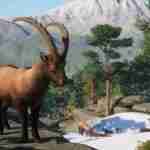 Planet Zoo's Europe Pack is yet another stunning DLC offered up by Frontier. It offers players a new timed scenario, over 250 building items to play with, and 5 new animal species. Create a new zoo within the Swiss Alps, or reinvent Venice's canals with the Planet Zoo: Europe Pack.