Frontier recently dropped a double whammy in the form of Planet Coaster Ghostbusters DLC and the Studios Pack DLC. While I do get excited when Planet Coaster offers up more thrilling packs, I am always dubious as to whether the new DLC will live up to previous packs like World’s Fair and Vintage Pack.

For Planet Coaster players that are looking for more rides, unfortunately you find an abundance of them in the Studios Pack DLC. What you will find, however, is extensive creation options, allowing you to design your own ‘working’ film studio.

Coupled with the release of the Ghostbusters DLC, your scenery and building items will now take up most of the screen. If you’re lucky enough to have been to Disney’s Hollywood Studios or Universal Studios, you’ll probably notice a resemblance with the Planet Coaster Studios Pack DLC.

While there aren’t many rides, the ones that are available are pretty fantastic. I can vividly remember taking my Mom on Tower of Terror at Disney World Florida, convincing her it was going to be a fun and casual experience.

Being presented with Horror Heights took me back to that moment, putting a smile on my face. Using other rides like Erie Elevation, you can create your own zombie-run terror ride.

Fans will also be pleased to know that the Hollywood backlot tour will now feature in the Studios Pack DLC. While it’s not really a comparitive ride to say, a rollercoaster, the Big Screen Tour will take your guests on a cinematic experience they won’t forget.

Create your own Hollywood tours using the studio-themed scenery, wall sets, and animated lights. Hey, why not introduce a hovering helicopter and a building that’s on fire? For the designers and creators out there, the Studios Pack DLC will pump your creative juices, offering up a platter of scenery items and music to make your own Hollywood production.

The only real downside to this DLC is the lack of facility buildings. There are only four new buildings in this category, making it the least of any Planet Coaster DLC we’ve seen before.

There’s no unique shops or stalls either, but there is a new entrance arch which brings various elements of the DLC to make quite the entrance. 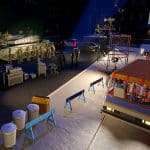 Price: $9.99
Buy Now
Game title : Planet Coaster: Studios Pack
Game description : If you're massively into creating wild theme parks in Planet Coaster and have the imagination to do so, you're going to absolutely love the latest Planet Coaster Studios Pack DLC. It takes a little more concentration than the other DLCs and packs we've seen before but offers plenty of longevity which balances out the lack of new rides.
Unboxed Reviews

7 Days to Tips and Tricks: The First 7 Days