Shuffling in my seat to the timeless classic, “who you gonna call?”, I was ready to jump in. While previous Planet Coaster DLCs offered lots of content, I was really pleased to see that Planet Coaster Ghostbusters offered its own mini-campaign.

Rather than being directed by Oswald, both new scenarios take direction from Dan Aykroyd. I felt like I was lining up for an audition to be in the film.

After supernatural encounters have been reported to the Environmental Protection Agency, they start digging around your newly inherited theme park. Of course, you’re not alone here. Why, who else is around? None other than the Ghostbusters themselves.

Fans of Ghostbusters will relish in the amazing recreations of the iconic Ghostbusters landmarks in this awesome Planet Coaster Ghostbusters DLC. Some of which include:

Aside from feeling like a film set, you’ll discover Ghostbuster-themed rides. Jump into the Ghostbusters Experience and shoot ghosts to earn points to rack up the highest score.

The RollerGhoster is another welcome addition for the faint-hearted. As you ride around the coaster, it will feel like music to your ears when you click on to the fact there’s an acoustic version of the Ghostbusters theme in the background.

You can also drive the ECTO-1 using the ‘Drive Vehicle’ option, allowing you to discover your Planet Coaster park in style. Looking for more Ghostbusters theme music? Don’t worry, the ECTO-1 of course blasts the classic, so you can enjoy it time and time again.

Similar to other DLC and Planet Coaster packs, the Ghostbusters DLC offers a wealth of new items, scenery, and facilities. It’s 100% worth the investment, packing high-rise buildings into a newly themed area of your theme park.

You can create a New York-esque feeling to any park you create. Whether you’re crafting buildings from scratch or using the high-rises as backdrops, this Ghostbusters DLC feels like it’s opened a whole new world of Planet Coaster creation options.

Planet Coaster Ghostbusters DLC – Is It Worth It?

Absolutely, YES! Whether you’re a fan of Ghostbusters or seeking a fresh new take on Planet Coaster, the latest Planet Coaster DLC brings a lot of joy, creation options, and scenarios.

Being able to create a full-sized Stay Puft Marshmallow Man is definitely going to be a priority. Now available on PlayStation and Xbox, I bet you can’t wait to jump in! 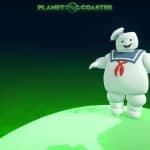