Patron Game Review – Is It As Challenging As Banished?

If you’re fond of city builders, but want a challenge, Patron is absolutely the game for you. Even with years of experience playing strategic city builders, Patron has me starting over and over to perfect my settlement.

If you look online at other Patron reviews, no matter what they think of the game, each Patron review says the same thing. This isn’t an easy game that should be taken lightly.

I feel Patron is going to be a Marmite-style game, players are either going to love it or hate it. For those looking for a chilled-out experience, something like Kingdoms Reborn or even Cities Skylines might be more appropriate. But if you are happy to be challenged and kept on your toes, Patron does just that.

Challenges come in all shapes and forms in Patron. From the standard keeping up with housing demands to cold and harsh winters that can be fatal without the right supplies to survive.

As with many other city builders, there is also the need to keep your population happy. This is achieved by manufacturing luxury goods. If supplies don’t meet the demand, before long you can end up with riots and eventually people leaving your town.

As you would expect from any good city builder, there are plenty of new technologies, buildings and even decrees to research.

Decrees can help to reduce upkeep costs, or even increase the productivity of some of your buildings. But these come at the cost of coins per year, which might make managing your treasury much harder.

One of the first issues I had, when I started playing Patron was knowing how to increase my population. Thankfully there are also decrees that can help in that area, but the games very short tutorial simply doesn’t cover enough to help you understand how the population works or can be managed.

The research tree is by far one of the most detailed and impressive I’ve seen in a game for a long time. However, there isn’t much mention of this in the tutorial.

One of the first things I check on city builders is just how many buildings there are to choose from. Patrons list of buildings is very impressive, with enough production and beautification buildings to really make an expansive city.

Many of the buildings have alternative work modes, which again is annoyingly missed in the tutorial. For example, it took me some time to realize that I could change my fisherman’s hut to produce crabs instead of fish.

This is the same for farms and ranches too. They can be altered to grow different crops and ranches can keep a variety of different animals, keeping your population happy with a wider selection of goods to choose from.

Patron is actively being updated with both new content as well as QOL updates. The developers recently added a buildings upgrades panel which shows you how many of your buildings have been upgraded and how many more upgrades they can have.

Just when you think you’ve got everything running well, Patron throws a spanner in the works by throwing hard choices your way.

These choices can have various effects on your city, which can help or hinder your supplies. They also might have an effect on your population’s loyalty or even safety.

Such events include the King sending pirates to your town. Housing them will reward you with money, goods, or both, but can hinder your town’s overall safety, but refusing can damage your reputation.

There are currently 36 events in Patron, each one offering a set of choices with unique outcomes. Although, it does feel sometimes like these outcomes events are a little repetitive. Many of them focus on the king making demands, which will either cost you goods or increase trade fees.

But as Parton has now opened up the game to the Steam Workshop, it’s now only a matter of time before the modding community starts to create some new events and add even more content into Patron.

Patron is an ambitious game, which strives to set itself apart from so many other games in a saturated market. And while I do think the developers have managed to pull off something unique, I can’t wait to see what the modding community does to Patron to improve it further.

I had the chance to catch up with the game’s developer on Discord today, who confirmed that the regular updates, which have been coming out almost every other day recently, are planned to be continued.

They also confirmed that there will be some DLC’s added to the game in the future, but for now, the focus is to continue producing new content, mechanics, and game fixes and tweaks.

Unfortunately, there are no plans for Patron multiplayer anytime soon, but that doesn’t mean it’s been completely ruled out, and as the team grows, there may be room for consideration.

Patron Update 8 is in the works where we’ll see some expanded mechanics. There’s a lot of potential for Patron’s gameplay and we’re really excited to see what comes out next! 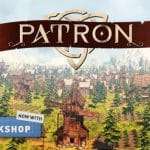