Developed by Bad Yolk Games, Main Assembly bears a likeness to games like Scrap Mechanic, offering creative sandbox delights. Even for those who may not show any interest in mechanics and robotics, our Main Assembly review will likely convert these opinions.

Main Assembly is a creative sandbox game, offering a wide variety of approaches to building your ultimate vehicle. Whether you’re into cars, aircraft, or seafarers, Main Assembly removes restrictions and allows you to indulge your inner robotic dreams.

Working for Olive Innovations, you can essentially build and create whatever you like. There’s an endless pool of parts and structures for you to work with.

Starting the game, you’re launched into an initiation program called “The Tutorial”. While you can skip the tutorial, if this is your first time playing Main Assembly, I highly recommend you follow it. Taking on the role of an endearing spherical drone, your mission is to create the best robots to assist humankind.

The Main Assembly tutorial will take you through the key mechanics of the game, firstly learning how to drive the vehicles you create.

Once you’re in the driving seat, you will learn how to build a vehicle, followed on by more intricate customization. Finally, you’ll be introduced to the Programming side of the game where you will learn the controls to use the features of the vehicle.

If you’ve completed the tutorial or decided to bypass it, there’s plenty of other options to choose from. Challenges mode introduces multiple scenarios where you complete objectives to be awarded stars.

These unlock parts and items to improve your gameplay experience. However, if you’re not up for doing things at a slow pace, you can visit Sandbox mode. This offers infinite creative options where you can unleash your creative juices to your heart’s content.

When you’re ready to battle against other players, you can visit Bot Brawl mode which allows you to face other players and vehicles, which is a seriously enjoyable game mode.

You can join an existing game or create your own, allowing friends to join you. Here you can create awesome machines together, much like Scrap Mechanic.

On the face of it, you might think there’s not much to do. However, I feel hard-pressed to find a game that offers this much customization. There are so many options, and you can choose to do this on your own or with your friends. While there isn’t much of a storyline to follow, I don’t feel that Main Assembly has suffered from not including one.

While the gameplay in Main Assembly is relatively clear cut, and the mechanics are pretty intuitive, the game can get very technical at times.

Completing the tutorial is a must as without it, you may underestimate the true complexity of Main Assembly. Utilizing the game mechanics is a real work of art, something I wasn’t particularly great at!

The gameplay mechanics feel very polished, offering a technically accurate experience that tricks you into feeling like an actual inventor.

Part of the gameplay that baffled me slightly was the driving aspect. It feels like Main Assembly has injected a lot of focus into the right areas while constructing and programming your vehicle, but when it comes to driving it, something is missing.

Taking control of the vehicle is fine, and acceleration seems responsive, but when it comes to steering and putting the breaks on, the input feels particularly sluggish. Granted, these kinds of mechanics do end up making you a better driver in Main Assembly, but the learning curve is a big one.

Despite the intense level of detail put into the game mechanics, the developers have clearly put a lot of effort into the graphics which work wonders.

The art style is very similar to Portal, offering minimalistic pleasantries that work with this type of game. Being able to create your own cute drone is another plus, something which Team 17 loves to include, and it doesn’t go amiss here.

If you enjoy playing aesthetically pleasing games with atmospheric, yet calming background noise akin to The Sims, then you’ll find that Main Assembly ticks all of the boxes.

Main Assembly is a game that adds simple graphics, accurate physics, and enjoyable gameplay to create a recipe that you can continually dip into. This charming sandbox game offers hours of entertainment in solo or multiplayer modes.

If you’re looking for a creative game that offers no bounds, look no further than Main Assembly. The polished mechanics cater to all skill levels, offering casual and technical play. 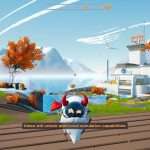