If you’re a fan of Goat Simulator, you will love Just Die Already, it follows the same zany physics, which is somehow even crazier with an old guy who has a knack for causing mayhem.

Just Die Already seems to have been receiving some mixed reviews, with some people slating it and others absolutely loving the game.

It’s not a game that is going to hook you for months on end, but I can’t deny that there is something extremely hilarious about running around as an elderly person causing mayhem in the city and flopping around like a spineless creature.

At the time of writing, the score is currently 74% positive, which is good to see people taking it for what it is, a bit of fun, not to be taken too seriously.

One of the things I’ve noticed from the bad reviews is just how active the team are around responding to bad reviews, which can be a rare thing these days, and perhaps should be done more often, so well done to the Curve Digital team there, even with negative reviews, a solid, personal response can go a long way.

In many of the negative reviews, the team kindly offered to refund the game, even when the players had surpassed the Steam 2-hour limit, which I thought was a really nice touch.

But to be honest, the developers have promised more free updates and have clearly been taking on board comments from the community, so it would be worth holding out to see what comes next if you don’t like it at the moment, or ran into issues, just wait on these updates, you might change your mind.

I actually found the map in Just Die Already very interesting and well throughout, with lots of secret areas and new places to explore all the time, I’m likely going to be running wild across the town for some time before I’ve found it all.

If running around the city, with your head flopping around, hanging off your body in single-player doesn’t sound fun to you, why not try tearing up the city like a pack of old farts instead.

As well as being able to play the game in 4 player co-op, the team behind Just Die Already recently released a new PVP mode too, which allows you to go to town on your fellow old people.

Personally, I found the main game more entertaining, the PVP side of thing was fun for 30 minutes, but the novelty quickly wore off, whereas, going around the city and ticking off your bucket list was a lot more entertaining in my books.

Just Die Already isn’t going to be making it to the hall of fame of video games, but as far as I’m concerned, it’s a solid title to just kick back and enjoy the rampant silliness of it all.

In many of the bad reviews, I read that people felt the ragdoll physics were too much, some of the puzzles were frustrating them, well that’s kind of the point, the game is meant to be taken with a pinch of salt, don’t take it too seriously, the devs certainly didn’t.

I mean, just look at that image above, does that look like a game that should be taken seriously! Personally, I will be coming back to Just Die Already, even if it is for an hour or two of mindless fun every so often.

Just Die Already is priced very reasonably too, which of course also helps, so at $11.99 you can’t really grumble, if you enjoy it you’ve bagged a bargain, if you don’t, you’ve not exactly wasted enough money to really worry too much about. 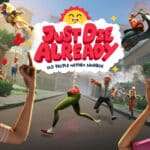