While I might not have been the biggest fan of the first Jurassic World Evolution game, the sequel did enough to ensure I had a great time building my own dinosaur park the second time around.

Jurassic World Evolution 2 did enough on its own to win me over, yet with every expansion, the game keeps getting better and better, and the latest of these expansions, the Late Cretaceous Pack, is no exception.

Not only does the Jurassic World Evolution 2 Late Cretaceous Pack come with an incredible choice of four new dinosaurs, but it’s also been released alongside the fourth free major update too.

The new dinosaurs added with the Late Cretaceous Pack are:

That’s two land dinosaurs, one new flyer, and a marine dinosaur to add to your park, making it a diverse pack offering incredible new dinosaurs for a reasonable price of just $7.99 at the time of writing.

While the Late Cretaceous Pack doesn’t bring as much to the game as the movie-inspired Dominion Biosyn did, it comes in at a much more reasonable price, offering great value for money.

The addition of the Styxosaurus is a particularly great move, as both flying and marine dinosaurs are always exciting additions to your park.

As is typical with Frontier games, the new DLC has been accompanied by a free major update. This includes plenty of bug fixes, quality-of-life updates, and some new in-game items.

There are too many new features that have been added with the new update to list them all, but you can read the full update list here.

For now, here are a few highlights from the new update:

Players no longer need to leave dinosaurs unconscious after tranquilizing them. Using the new stimulant dart either directly or through a task assignment will wake up tranquilized dinosaurs quicker.

If certain flying reptiles manage to escape, they now attack capture teams, giving players a whole new challenge to manage. Capture teams also have a condition bar now, which when depleted will result in the vehicle being completely destroyed and needing to be replaced.

Changing the Color of Decorative Lights

Some decorations now have an added lighting tab within the decorations panel, allowing players to adjust the color of decorative lights.

This might seem like a small change, but it goes a long way to making sure players have more freedom to really make their parks into their own unique creations. 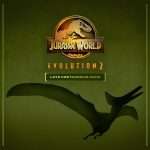