Expand your park to the Mediterranean

Jurassic World Evolution 2 continues to explore a world where dinosaurs co-exist side-by-side, continuing to grow the franchise with the latest DLC, Dominion Malta. As is usually the case with Frontier, the new paid DLC has also been released alongside a free update for all players to enjoy.

Jurassic World Evolution 2: Dominion Malta is set before the events of Jurassic World Dominion and takes players to the warmth of the Mediterranean, this time placing them in charge of multiple facilities across three new locations.

The new Dominion Malta expansion brings with it a new campaign that brings back many of the iconic characters from the movie, as well as several new dinosaurs.

Instead of gathering samples and using science to obtain new species, players must this time take advantage of the Dinosaur Exchange, buying dinosaurs or eggs from either the underground or the authorities.

This fresh new approach makes things much more interesting and pushes the new features past what Dominion Biosyn added to the game. It also makes it quicker to get new dinosaurs, removing the need for players to wait for scientists before adding them to the park.

For those that enjoy working on gathering dinosaur genome data, you can even purchase that from the dinosaur exchange too.

The exchange works on a reputation-based system, where players need to complete tasks for either the authorities or the underground, and once this has risen, you will have more choices available at the exchange.

For those of you that play Ark: Survival Evolved, or have extensive knowledge of dinosaurs, you might be familiar with some of these new dinosaurs.

Of course, you can add other dinosaurs from the base game and expansion to the Jurassic World Evolution 2 Dominion Malta campaign too, letting you create a bigger Jurassic Park than ever before.

While these might all be small dinosaurs, they are undeniably awesome additions to the game.

Jurassic World Evolution 2: Dominion Malta adds some small but impressive new dinosaurs to the mix. As well as a brand-new campaign that spans three new islands and plenty of other content, all at a reasonable price.

And to sweeten the deal, the free update, alongside the Jurassic World Evolution 2: Dominion Malta expansion makes it even more worthwhile. 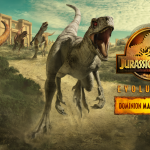