Following the recent release of the latest Jurassic World movie, Jurassic World Dominion, Frontier has now released their latest expansion Jurassic World Evolution 2 Dominion Biosyn. After giving us a code and asking for a timely review, we honestly had too much fun and submitted it just a tad late, but that itself should be enough to tell you that it’s a worthy addition to the franchise.

While there have been four DLC for Jurassic World Evolution 2 already, the Dominion Biosyn DLC is by far the biggest update to the game so far, not only including new dinosaurs like the previous expansions but also adding a whole new campaign and two fresh maps to enjoy.

Following a recent breakthrough from scientists, it is now believed that many dinosaurs actually had feathers, but with many dinosaur games still including the older pre-feathered concept of dinosaurs, it was nice to see the Jurassic World Evolution 2: Dominion Biosyn follow the movie’s footsteps by including some new feathered dinosaurs.

I know, you’re likely thinking to yourself are feathered dinosaurs worth paying for? In my opinion, yes they are, but even so, they are just one completely awesome part of an incredible expansion, and in honesty, the Therizinosaurus is one of the most awesome-looking dinosaurs ever.

In total including both feathered and non-feathered dinosaurs, there are six new dinosaurs and variants included in the Dominion Biosyn DLC:

While there is a great line-up of land and air dinosaurs, I’m still waiting to see some of the epic sea creatures, but while I wait patiently for that, I must admit, watching the new Giganotosaurus variant roaming around my park is an absolute treat.

When I reviewed the original Jurassic World Evolution, I have to admit, I was disappointed. It lacked the creative freedom that I loved in Planet Zoo and Planet Coaster, and generally, I just didn’t find myself as gripped by it as I did with the other games from Frontier.

When Jurassic World Evolution 2 came out, I was dubious about playing, in honesty, I was worried that they would make the same mistakes that in my opinion made the first game tedious and boring. Thankfully my concerns were wrong and the game’s sequel had been transformed into something much more enjoyable.

If you’ve seen Jurassic World Dominion, you will be familiar with the Hyperloop system, which has made its way onto the latest Jurassic World expansion, acting as a new way to transport both power and even guests.

The Hyperloop system completely removes the need for pylons, which in honesty just became an eyesore, and gives you another level of control when it comes to trying to make a park that actually looks good, you know, without massive electrical pylons all over the place.

The objectives in Jurassic World Evolution 2: Dominion Biosyn feel like somewhat familiar ground, with players needing to release specific dinosaurs and keep their happiness levels to a high standard. But with a new map, new dinosaurs, Biosyn buildings as well as new mechanics, I don’t mind repeating familiar objectives.

While the new dinosaurs, both feathered and non-feathered look incredible, and the buildings add a nice fresh touch to the game, I would recommend waiting until you’ve seen the movie before taking on the campaign, as there are some spoilers in the cutscenes, which you can’t skip.

If you’re waiting to watch the movie, you can always play the new maps on sandbox mode, letting you experience the new content, without worrying about seeing any spoilers.

The Biosyn Valley campaign, for those of you who’ve seen the film, features familiar movie character voices to guide you through your mission. There’s a plethora of amber for you to mine to research new species, extracting DNA to expand your dinosaur genomes.

You’ll build the facility from the ground up, with several new buildings to discover. Allowing you to place buildings further away, you’ll soon need to rely on the hyperloop system to connect them up. This is a far more advanced way of taking on any previous Jurrasic World Evolution campaign; now you can put observation towers in the middle of an enclosure without some kind of convoluted fencing layout to accomplish what you need. As you open up more tech, you’ll even come across invisible fences and implants to migrate dinosaurs.

The first mission places players in control of the Biosyn Sanctuary before the events of the movie, with a massive map, lush forests and lakes, and plenty of space to build upon.

(Minor spoiler below, skip it if you’ve not seen the movie)

The second mission looks at events after the fire from the movie, with players tasked to repair and rebuild from the ashes in the wake of the destruction caused by Lewis Dodgson.

While I loved the concept of the second mission, wrangling dinosaurs and driving around with the response team just isn’t as fun as building up the park in the first place.

Note: You can play the Biosyn Valley map in sandbox mode.

Biosyn Valley isn’t the only new map to join Jurassic World Evolution 2 with the Dominion Biosyn DLC, players can also take control of Owen’s ranch in the Sierra Nevada mountains in both chaos theory mode and sandbox.

The new chaos theory mode introduces a few more new buildings, primarily designed to keep dinosaur poachers away, these include watchtowers, spotlights, and even traps.

Once again, the new chaos theory map follows the game’s previous structure, having players following objectives and aiming for a five-star par. But having to watch out for poachers and utilizing both the new buildings and wrangling mechanics, does make for much more fun and interesting play.

Jurassic World Evolution 2: Dominion Biosyn hasn’t reinvented the game in any way, but has instead added new mechanics that neatly match the new movie, without making it a steep learning curve.

The Dominion Biosyn expansion is Jurassic World Evolution 2’s biggest expansion to date, and with new maps, mechanics, dinosaurs, buildings, and more, it’s certainly worth the money for those who have milked the base game for every last drop of content. 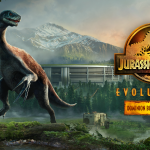 Jurassic World Evolution 2: Dominion Biosyn adds new dinosaurs, buildings and game mechanics, with tons of other new content based on the Jurassic World Dominion movie. Build Biosyn's park from the ground up, or take on the Chaos Theory challenge at Owen's ranch.