Going Under has somewhat surprised me, it’s a game in which I had expected to invest very little time and went in not expecting much. I was pleasantly surprised to find myself getting more and more addicted to this game, pushing to get myself deeper into the game’s three hardcore dungeons.

When I say ‘hardcore dungeons’ don’t expect a Diablo 3 level of demonic presence. They aren’t those kinds of dungeons, instead Going Under features 3 failed startup businesses, which now live in the basement and are overrun with monsters.

While Going Under isn’t the longest game available, what it lacks in length is definitely made up for with tons of whacky character.

You play as Jackie, a quirky unpaid intern who has applied for a marketing role at a soda company, just to find out that her real job will be dealing with the monsters from three failed startup companies living in the basement.

As the game progresses Jackie can start enlisting the help of other staff members, but of course, not until she has run some essential work errands for them, such as punching 10 goblins to death with her bare hands.

At the start, you will only have access to one dungeon, which you shouldn’t expect to complete on your first run. The dungeons are actually a lot more difficult than I had anticipated, but it doesn’t take long, nor do you need to complete the first dungeon, before the second one, Winkydink, opens up.

If you thought the first dungeon, Joblin, was weird, things get even stranger in Winkydink, a failed dating app business that is now overrun with weird dating monsters and demons… Or at least I think that’s what they are?

As you would expect from a game that doesn’t take itself too seriously, the story isn’t the main attraction here and therefore isn’t the best aspect of Going Under. It’s the strangely addictive gameplay and even stranger weapons that really make Going Under something special.

Each dungeon is made up of 4 levels, and each of these levels has multiple rooms filled with a random assortment of weird monsters.

Some of the weapons at your disposal are ludacris, to the point that I found myself aiming for odd weapons instead of powerful ones, just for a laugh. These weapons range from poking monsters with a pencil to destroying them in style with an oversized guitar.

In some rooms in Joblin, you even have to face goblins that attack you by running you over in a small car, which you can then use as a weapon should you kill them.

As you plow your way through the dungeons over and over again, each time you exit, you will find that your colleagues have quests for you, by completing these quests you can equip them as a mentor, which will unlock extra perks making your next run a little easier.

Each mentor has a unique set of perks they will give you, which can then be leveled up by completing more quests, my favorite of these was Ray, the company CEO, which gives you a company credit card allowing you to buy things in the dungeon, even if you can’t afford it.

But some of these perks come at a price, for example, while Ray does give you the company credit card, if you do spend more money than you have, you go into literal crippling debt.

When I say literal crippling debt, I mean you get a giant ball and chain, which slows you down, and the more you spend, the bigger the ball becomes, making it harder to run from or dodge enemies.

Going Under is packed full of metaphors, which any startup will understand. It’s these small details that make Going Under such a fantastic game.

As well as ‘working’ from the office, Ray also tells you that you can occasionally work from home, which for a slayer of basement dwellers, actually means just going home and chilling.

Once you are home, you can chill and listen to some music, or more importantly change your outfit, if you’ve been lucky enough to unlock new ones yet.

Each time you finish a dungeon, no matter if you win or lose, you will be rewarded with a special currency that can be used to buy perks to help you with your future fights.

As you progress and complete more battles, you will start to find the game becomes a bit easier, making the end goal of reaching the final bosses for all three dungeons a little more achievable.

When I was first asked to do a Going Under game review, I have to be honest, I didn’t have high hopes for it. But it’s one of those rare few games which unexpectedly surprised me.

Each time I go into a dungeon, I’m greeted by equal parts crazy monsters and crazy weaponry, with an assortment capable of making each fight you go into different from the last.

Going Under is the perfect level of difficulty too, hard enough that you can’t just blitz through it in one sitting, but achievable enough that you’re not throwing your controller or Nintendo Switch out the window.

So, if you’re up for a challenge, prepare to wield office junk and smash some goblins to bits. 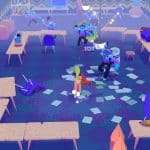