Water World without the Smokers, or Kevin Costner

Flotsam is a very unique city builder that also has an obvious political statement about global warming in its agenda. While Flotsam has been out for some time now, I wanted to wait before committing to a Flotsam review, as I could see the game’s potential, however, I could also see Flotsam needed more content too.

Now that the game has a couple of years of development behind it, there is finally a solid game, with enough content to start justifying the game’s price.

Flotsam doesn’t have any kind of campaign and instead opts for a more open-ended approach that allows players to dive straight into the game and figure things out themselves.

There’s currently not really a tutorial either, with players having to figure out how to get new drifters, or resources themselves, or by using the information pages which walk you through each section of the game.

When you first start a new game, you will be able to choose 3 drifters to start with, each of these will have a couple of skills based on both pre and post-apocalypse experience.

You start Flotsam with a ship, that can then be expanded and built upon, but to do this, you need to explore the world and gather resources to refine and use for building.

To travel the map in Flotsam, you need to use power, which is created at the ship’s generator, as well as solar panels and other electricity buildings later in the game, but at the start, this cripples how far you can go.

The world is scattered with trash that can be repurposed to help continue your communities ship, this also includes wreckages and islands that have the chance of finding other supplies such as canned food, or even other drifters if you’re lucky.

In the later stages of the game, things start to become much more difficult, as you fight to keep enough food and water, while also making sure you are reducing pollution within your food stocks as well as having enough raw resources to continue expanding, this is when finding more drifters really comes in handy.

The art style of the game is really awesome, while you can see a deeper message here with the obvious signs of end times, with buildings under the ocean, it’s easy to forget that this is a post-appocolypse game considering how pretty it is.

Flotsam is well balanced, collecting too much and expanding too quickly can weigh down your ship, causing issues with travel, but not having enough can cripple your economy, halting expansion, or even causing your drifters to get sick from hunger or thirst.

As with many other resource management based games, you can manage the priority of work, but focusing on one area too much, means another is being neglected and could be fatal to your drifter’s survival, so researching new ways to speed up tasks, like fishing and scavenging boats are key to getting more done per day. 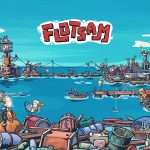 Price: $24.99
Buy Now
Game title : Flotsam
URL : https://www.pajamallama.be/flotsam/
Game description : Flotsam is a survival city-builder developed and published by Pajama Llama Games and is still currently in early access with active development. The game focuses on survival and city building in a world that has been destroyed due to mass flooding.
Unboxed Reviews