Regularly compared to Among Us, Dread Hunger offers much more than can be expected. In this survival game of deceit and team play, two (by default) players will get chosen at random to become Thralls. The remaining six crewmates must work together to navigate the explorer’s ship around treacherous icebergs to complete each mission while identifying the betrayers.

Players around the world can take part in three different missions on either NAE or HK servers. Despite playing the tutorial, I instantly felt a little lost in my first Dread Hunger game. Of course, I was selected as one of the Thralls, which posed some difficulties since I didn’t know what I was doing.

After a couple of games, I learned quickly from other players and felt more comfortable about deceiving my teammates. Similarly, playing as an explorer was just as fun, working together to collect coal for the boiler to push the ship on to its destination.

What Is Dread Hunger?

Dread Hunger is part social experiment, part adventure/survival game. Aside from one expedition I joined, I have felt welcomed by the community, getting to know the players and often continuing future expeditions with the same crew.

Note: It’s almost imperative that you have a headset for Dread Hunger. If you’re seen as not communicating, people will instantly suspect you as a player that has something to hide.

Eight people are launched into an expedition. After a quick game of Poker, two players are dubbed Thralls; the Thralls identity is not revealed to anyone, apart from the Thralls themselves.

In all of the games I’ve played, everyone moves to the boiler room to place their lump of coal into the furnace. “Hunter one, Engineer two, Captain three”, and so on. What I love about Dread Hunger is the ability to form a social community where rules and trends carry across from expedition to expedition. Even if you’re new to the game, players are generally accepted and taken under the wing of another teammate to show them the ropes.

Getting picked as one of the Thralls is undoubtedly nerve-racking at first. There are essentially two routes you can go down; low profile or high profile.

Low-profile Thrall play is about sabotaging the ship and its crew in the least identifiable way possible. Generally keeping with the group, keeping up comms, and doing the bare minimum, but just enough, to throw the ship off its course.

With this style of play, you can gather coal like the rest of the explorers, but instead of putting it into the furnace, quietly dump it into the sea where it can’t be found. You may even be tempted to gather food as the Hunter and discreetly poison it.

High-profile gameplay is a lot riskier, but it’s far more rewarding. Jumping off the ship early on to collect bones and wood is a solid way to start building up your Totem collection. The more totems you have and the longer they stay in play, the higher the tier of your spells are.

As the ship forges on, you can command whiteouts and cannibal attacks, or stay close to the ship and attempt to blow holes in it using explosive barrels. Either way, the aim is to sabotage the ship and its crew to prevent them from reaching the finishing line.

As an explorer, your mission is to hunt, craft, and survive long enough to reach the end. You’ll need to gather coal to fire up the furnace in order to move the ship. Coal can be found in Coal Sleds dotted around the map and carried safely back to the ship in your inventory or a Coal Barrel.

But, there’s more to just gathering coal. Explorers must battle the almost-constant need to overcome hunger, and warm themselves from the freezing temperatures. As the days go on, blizzards occur, dropping the temperatures even further and making it harder to stay off the boat for long enough to gather materials.

On-board, in tents, and houses, players can craft items at the workbenches to help with their mission. Items include weapons, nails, a satchel, and more to keep up the pace of survival. Crewmates will often turn to the Cook in the hope he’s not a Thrall, to cook tasty Meat Stew, cups of tea, and antidote to ward off potential poisonings.

In the meantime, it’s also your job as explorers to navigate the ship safely through the icy sea, avoiding giant icebergs, in an effort to reach the open waters. All of this must be done alongside identifying the Thralls to stop them from sabotaging the mission.

Uncovering the truth in Dread Hunger is what makes the game so inviting. As a good guy, I was openly helpful, contributing to the progress of the crew, collecting coal, gathering food, and patching up any damage on the boat. Meantime, keeping an eye on potential suspects, following their every move to ween out the villains from the group.

Admittedly, I often get it wrong. Just yesterday I outright killed the Reverend who I was convinced wasn’t contributing enough, and therefore must be the Thrall. He got his revenge, locking me up in a cell until I could persuade the rest of the crew I wasn’t a Thrall.

As a bad guy, I’d take myself off to find bones and wood, while keeping up with the group chat so as not to raise suspicion. I’d take the eyes off me by suggesting other players were the Thrall because I had seen them throw some coal or get out a syringe to try and poison someone.

Dread Hunger ultimately offers the right balance between several game genres. Granted, it might not offer hours upon hours of longevity, but for the time being, I’m enjoying being drawn to the social aspect of it, nervously tapping my feet to see whether I get picked as the Thrall.

Whether you want to put your friendships to the test or join up with players from around the world, it’s not easy deceiving a group of people or trying to play detective and identify the true villain. 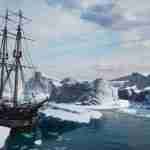 Price: $29.99
https://dreadhunger.com/
Buy Now
Game title : Dread Hunger
Game description : A social experiment like no other; deceive your friends or help your crewmates, the choice gets decided for you in a battle between good and bad.
Unboxed Reviews