Don’t Starve is a strange world full of animals, creatures and monsters. Some will be passive, some neutral, and some aggressive. Knowing what does what is key to your survival! I can’t count how many times I have walked up to a monster thinking it was friendly *sigh*. There are three types of aggression level to consider:

Birds: Birds can be looted with a bird trap. They can yield seeds, morsel, jet/crimson/azure feather.

Butterfly: Butterflies spawn from flowers or evil flowers. You can loot them with a bug net. The loot they’ll offer consists of butterfly wings (98%) or butter (2%).

Chester: Chester spawns from eye bone. He has 3 variations: normal, shadow and snow. If you loot Chester he will produce whatever is in his inventory.

Fireflies: Fireflies can be caught in a bug net. The loot is ‘Fireflies’ (themselves) and they don’t respawn.

Pig King: All hail the Pig King! The Pig King can’t be killed. He’s usually present in one of the pig villages. If you get the honour of meeting him, you can trade meat and trinkets for gold nuggets.

Gobbler: You’ll often come across a Gobbler when foraging in a berry bush. They tend to jump out (scaring the life out of you) and running away. If you place a vegetable or berry on the ground, the Gobbler will slowly walk towards it. This gives you the opportunity to be attacked. As long as the Gobbler hasn’t yet approached the food stuff, your chances are pretty good!

Mandrake: Yay my personal favourite! Mandrakes are a very rare mob (I’m still proud I found one). When Mandrakes spawn, it’s usually within the same area as each other. They can be used to make items and food dishes. If you pick a Mandrake during dusk or nighttime it will follow you around.

Rabbit: Don’t even bother trying to run after and kill one of these. When killed, Rabbits drop 1 morsel. Place an animal trap nearby to catch one.

Glommer: If you kill a Glommer via a direct player kill, Krampus will immediately spawn. Killing Krampus will produce charcoal. If you don’t want Krampus to spawn, kill a Glommer indirectly by luring it near a Catcoon. You can find Glommer during a full moon at Glommer’s statue.

Moleworm: Moleworms travel underground. They will surface to collect items and return to their burrows after. You can attack a Moleworm when they surface. The loot they offer will contain anything that they themselves have looted.

Bee: Normal bees are neutral but killer ones are aggressive. Don’t do what I’ve done and attack their hive, they don’t like that! You can loot bees for honey and stingers with a bug net.

Beefalo: Beefalos produce manure which is useful for crafting farms. You can shave a Beefalo for Beefalo wool with a razor. Alternatively you can loot them for meat, wool, and their horns.

Koalefant: These Creatures also produce manure. You can loot them to obtain a Koalefant trunk and meat.

Pig: Pigs spawn from pig houses. If you offer them food they may become your friend (aww)! If you’d rather kill them, pigs will drop meat and pig skin.

Pengull: If you choose to kill a Pengull, it might be worth doing so during the night. Using gunpowder you can quickly farm eggs, feathers and their meat.

Batilisk: These are little monsters if I do say so myself! They spawn from unplugged sinkholes (lesson learnt there). They deal small amounts of damage and can be killed with one or two hits. Much like Beefalos produce manure, Batilisks produce Guano.

Buzzard: Buzzards circle the skies in search of meat (think vultures). If you approach a Buzzard whilst it’s eating it will peck at you which will do some damage. If you flee it won’t follow you.

Catcoon: Catcoons aren’t really a fan of other creatures. They’ll pounce on them until they’re dead and will be aggressive towards some animals. You can befriend a Catcoon by offering toys or food. They’ll in return give you gifts by coughing up items (lovely).

Volt Goat: Given their name, these goats are like walking lightning rods. If a Volt Goat is charged by lightning they will become aggressive. If you loot a charged Volt Goat you can obtain electric milk.

Mosling: Moslings are small baby birds. If you attack a Mosling whilst it’s parents are still alive, the whole herd will call for help. If you kill the parent, the Moslings will become very angry and attack. 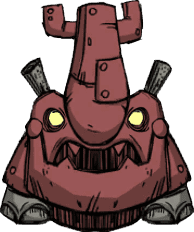 Clockwork Rook: These Creatures deal 45 damage to players and 400 to anything else. You can use Clockwork Rooks as battering rams to destroy forests and other creatures.

Frogs: These are insanely annoying. Frogs knock items off your inventory whilst they’re attacking you.

Ghost: Ghosts spawn from graves and offer no loot. They have 200 HP and deal 15 damage.

Hounds: Also really annoying! The HP and damage depends on the colour of the hound. The colour also determines the loot.

Werepig: During a full moon, pigs and guardian pigs will turn into Werepigs. They will stop and eat any food on the ground.

Spider/Spider Warrior: Generally speaking spiders will only come out during the night or if their dens are attacked. They may also appear if their webs are stepped on. Spiders drop Spider Glands which are useful for helping to resurrect the dead!

Tentacle: They spawn in marshes. Careful not to step on one! Tentacles have 500 health and deal 34 damage.

Mosquito: As annoying as they are in real life! Mosquitos spawn from ponds. You can catch them with a bug net or kill them for their Mosquito Sack.

Crawling Horror: If a player’s sanity is 15% or lower, these will turn aggressive. Walking closer to one will decrease sanity even further.

Terrorbeak: Similar to Crawling Horror’s, these appear at the same percentage of sanity.

Birchnutter: These spawn from poison birchnut trees. They leap at players and attack them.

Poison Birchnut Tree: When cutting down a Birchnut tree, it will drop birchnuts. Other Birchnut trees in the area may be awakened and start attacking. Angered Birchnut trees may spawn up to 5 Birchnutters which will attack players and other mobs.

These monsters, which I’m dubbing The Big Boys, are by no means fun! They hit hard and they’re pretty scary.

Charlie (Night Monster): This invisible hostile damage source attacks when there is complete darkness. If you don’t find a light source when night time falls, bad things happen. The character will take 100 damage and lose 20 sanity. This will happen every few seconds until a light source is found or you die.

Spider Queen: These disgusting beasts spawn from tier 3 spider dens. With 2500 health, Spider Queens are pretty tough. If you do manage to kill one, you’ll be able to loot monster meat, silk, spider eggs and spider hat.

Treeguard: Treeguards come in three sizes; small, normal and tall. Their health and damage increase with each size. Treeguards will try and target anyone who has chopped down trees in the area. You can try and pacify one by planting pine cones in the vicinity.

Varg: If you’re tracking down a Koalefant you may end up tracking a Varg instead. The Varg can summon hounds as it’s special ability.

Ewecus: If you’re tracking through suspicious dirt piles, there’s a 50% chance you’ll encounter one of these instead of a Varg. The Ewecus spits mucus which immobilises the player.

Krampus: Krampus will spawn if the players naughtiness level exceeds 50. Naughtiness can increase by killing passive creatures with weapons, murdering animals in your inventory, etc. Krampus is greedy and will loot items in sight including backpacks. He does 50 damage and has 300 HP.

Deerclops: Deerclops has a whopping 4000 HP and deals 75 damage to players. His AoE attack can destroy structures and trees.

Bearger: Dealing 100 damage to players, this beast with 6000 HP is no easy task. Bearger will eat food from the ground and from containers. He sheds his fur every 45 seconds.

Moose/Goose: Is it a moose? Is it a goose? It’s both! It’s special ability is honking (not that kind) which causes the player to drop their weapon.

Dragonfly: From personal experience, don’t go near this thing! It takes up half the screen! The Dragonfly has 27500 HP!! It deals fire damage when it’s mad and spits lava. All-round unpleasant really.

Don’t forget to check out the latest update to Don’t Starve (Wormwood) here.