The Devil in Me Review

Inspired by H. H. Holmes’ murder castle, The Devil in Me serves up a platter of nightmarish prospects in the fourth and final installment in the Dark Pictures Anthology.

Unlike previous games, The Devil in Me is the first game of the series to offer a story based on “real life”. Rather than the supernatural backstory we saw in The Man of Medan, Little Hope, and House of Ashes, this game feels more unnerving thanks to its historical roots.

However, there are too many elements of The Devil in Me that unfortunately let the side down. It’s a shame because the series has been pretty good so far, but dated graphics, lackluster casting, and drawn-out detours make it even less appealing to check in to Granthem Du’Met’s hotel.

While it wouldn’t necessarily appeal to me to enter a reconstruction of H. H. Holmes’ murder house, the crew of filmmakers in The Devil in Me are certainly keen to explore what’s on offer since they’re making a documentary on America’s first serial killer.

It’s soon pretty clear that Du’Met isn’t as inviting as they hoped him to be (well, he is, just not for the right reasons). Rather than recreating the horrific events that took place, he’s keen to reenact them, too, much to the crew’s horror.

With a real historical event at the root of The Devil in Me, exploring the hotel, discovering clues, and revealing the identity of the owner certainly had me hooked. Like all of the Dark Picture Anthology games, I was really keen to uncover the story. But rather than uncovering the story and ensuring the playable characters weren’t slaughtered, I felt less worried about them than I did in the previous installments.

It was hard to feel invested in their survival since they were much less interesting than characters I had played before. Jamie and Erin are clearly into each other, Kate and Mark recently broke up, and Charlie really only cares about his cigarettes. Although the relationship statuses weren’t exactly fresh and exciting, that part didn’t bother me. It was the lack of willingness to keep these people alive that left a bad taste in my mouth. I just wanted to get through the story and get to the end.

However, that’s not to say the entire game was bad or boring. In fact, there were certain aspects of The Devil in Me that I preferred compared to previous titles. While the game is still highly cinematic, it feels like there is a little more freedom in parts along the way. For example, the characters have unique items only they are able to use, like the headphones that allow Erin to hear amplified sounds or Kate’s directional mic that allows her to hear through walls.

It’s a shame, though, that there was such a step back in terms of visuals than we saw earlier this year with Supermassive Game’s The Quarry. Rather than movie-like graphics that could be forgiven for looking like the real thing, The Devil in Me felt very dated. It’s not horrific, but we know what the PS5 is capable of handling, so the step back was disappointing. Not only visually, but in terms of how the game played, too. Basic character actions like opening something or using an item came across as segmented and drawn out. I know how to open a drawer, so I don’t need to see every single action leading up to that.

Once those annoying movements were out of the way, The Devil in Me offered some truly jump scares. One of those memorable moments came in the form of the bartender. But, I won’t spoil it for you. As the game progresses, those scares become more frightening as the physical threat is more apparent. When a mysterious figure takes on the character and dresses as H. H. Holmes, things really kick into action. Decisions have to be made on the spot, or you could end up in one of the many torture chambers you’re inevitably going to come across.

Outside of the intensity of the game, and, literally outside of the hotel, you’ll spend a lot of time searching for clues and premonitions. These parts felt really detached and I struggled to remain engaged. This was especially true when annoying puzzles came into play, requiring me to instruct characters to move boxes or walk balance beams with no real threat.

The premise of the game held so much hope, and it’s something I had been looking forward to for a long time. The what-could-be horror adventure felt jolted by dated visuals, drawn-out movements, and a lack of care for the character’s development. And, because of these factors, the story felt less involved and the stakes were lower compared to other Dark Picture Anthology games.

While The Devil in Me differed from previous titles since it was based on something historical, not much else has changed, giving it a deflated ending to what could have been an all-around solid game series. 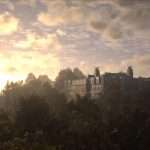 The Devil in Me

The Devil in Me is the fourth and final installment in the Dark Pictures Anthology. The series has taken us on some truly interesting and horrifying adventures, but the final nail in the coffin didn't round it up nicely.