Deathloop has quickly become a contender for game of the year, with its impressive visuals, revolutionary gameplay, and ultra-stylized, with a splash of 60’s decor design, what’s not to love.

What is Deathloop’s Story?

One of the things that makes Deathloop a masterpiece is the complexity of both its story and the game’s extremely unique and intricately designed features. Individually, these features and stories have been done before, or at least to a similar design, but Deathloop weaves together so much, in a way that doesn’t overcomplicate things.

After waking up on the beach, you soon realize that you have no recollection of how you got there, what you’re doing, or even what your name is.

Before long, you start to receive messages, from an unknown source. This source is seemingly helping or encouraging you, at times even giving you warnings or information, such as your name, Colt.

Before long, Colt realizes that he must break the loop, and in order to do so, he must first kill 8 visionaries before the day ends, or before he dies. Sounds easy, right? No, firstly, the visionaries are all in different districts at different times, which makes it impossible to kill them all in time, without some tactical maneuvering.

Secondly, Julianna is out for Colt’s blood. Julianna is one of the key components that make Deathloop so interesting. She is often controlled by other players online. While you are able to turn this feature off, it creates a challenge that makes the game much more interesting as well as deadly.

As I mentioned above, Deathloop has an interesting feature, which is the ability to play as Julianna and attempt to stop another player from breaking the loop.

Before you are able to take the reigns as Julianna, you must first complete the lengthy tutorial. But to be honest, I would go a bit beyond that before taking on other Colts in the hunt mode.

When you’ve played a couple of games as Julianna, you will start racking up points and levels. This will allow you to unlock new skins that can be used in the game’s main Break the Loop mode for Colt.

If you are playing as Colt, and you’re up against a skilled player, you can’t just exit the area and get away that easily. You need to physically get close to a signal jammer that is blocking your exits, hack them and then escape to the tunnels.

This makes things very hard, as most Julianna players will know to stay close to the device to stop Colt from leaving.

Having this extra layer of difficulty really has bumped the score up on this game for me. While it’s still an excellent game when playing with human opponents off, having that extra threat and difficulty really does making it an edge-of-your-seat experience.

One of the things I love about Deathloop is the ability to truly play it the way you want. Many games state that they are stealth or brute force, but by design somehow push you in one direction. Just to be clear, I’m not talking about the band, nothing could push me to them!

With Deathloop, you really do have the option to be sneaky, set traps, stealth kill, and stick to the shadows. Alternatively, you can go in guns blazing.

There’s nothing stopping you from playing how you want to play. Well, apart from an angry, potentially human-controlled lady who’s out to murder you, that might shake up your playstyle a bit.

Slabs are another item in-game that really helps you to shape the game how you want it to be. As you progress through the game you will start unlocking new slabs, these will provide you with new abilities that will help you play the game your way, through teleportation, disguises and even the ability to pick up and slam opponents around.

Once you have passed through the extremely large tutorial, you will be set on a mission to learn how to keep objects through each loop.

As you progress through the story and start to learn some of the game’s mechanics and weapons, you will begin to find trinkets and slabs that enhance both your weapons and gameplay, making it even easier to play exactly how you want to.

For the purpose of this review, I tested Deathloop both on a PS5 and Steam. Both had their own pros and cons. When I say cons, I’m more pointing towards advantages that the one system has over the other.

In both tests, I never really stumbled across any major issues with the game.

If you’ve been lucky enough to get the latest next-gen system, there are some real advantages over the other versions of the game.

I used to be an Xbox fanboy, but since the PS5 was released and the awesome features of the new dual-sense controller, I seem to find myself swinging towards PS5, and Deathloop highlights why this was a good idea.

Deathloop is a stunning game, with both incredible audio and visuals. The PS5 does everything within its next-gen power to amplify the sound and make it even more incredible.

While I do highly recommend playing Deathloop on a PS5, there are some drawbacks For example, a console, next-gen or not, is never going to match the power a solid gaming PC can offer, especially not with services such as Nvidia’s GeForce Now service.

Essentially the choice is between stunning graphics, which cannot be beaten, by playing on the PC version of the game, or immersive audio, which makes the game much more exciting on the PS5.

The level of detail that has gone into the PS5 version really has taken me by surprise. Each weapon in the game makes its own unique sounds and vibrations with the controller. I could genuinely tell which gun is being used without even looking at the screen.

It’s not often we review a game and give it a perfect 10 out of 10 score. But when I do get that chance, it gives me a warm tingly feeling, just like the feeling you get when you obtain information on Deathloop and know that information takes you a step closer to breaking the loop.

No matter how many times you are killed, each time you learn something new, it never gets old. It doesn’t get frustrating, it just empowers you, knowing that the next time around, you will know a bit more than you did on the last loop.

Throwing the threat of a human-controlled Julianna into the game makes things much more interesting as well as difficult. The constant fear that once you’ve finally made some progression that can all be thrown away by another player killing you, is so much more exhilarating than I had imagined.

The map of Blackreef is one of the most detailed and cleverly constructed game maps I have ever seen. At first, I thought many of the game’s districts were too small, but before long I realized that there are tons of buildings and alleys that lead to entirely new areas, often even tucked away by tunnels, making it feel like an achievement when you find them.

Deathloop is a game that will be marked in history as one of the few games to take several complicated mechanics and roll them together so neatly without screwing it up, something that seems to be rare these days. 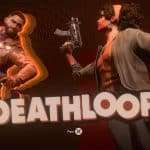 Buy Now
Game title : Deathloop
Game description : Colt the head of security for Blackreef must relive the same day over and over again until he breaks the loop, the only issue, he has 1 day to kill 8 visionaries to break the loop. Play as Colt and break the loop or play as Julianna and protect the loop by sabotaging other player's games.
Unboxed Reviews