With the Original Dead Age game getting so much positive feedback, it really comes as no surprise that the series would be coming back for a second helping of zombie action, with Dead Age 2.

With so many games taking a fun spin on the zombie apocalypse, such as the Dead Rising series, it’s nice to see a game that goes a bit deeper and looks to show players the sheer gravity of the situation of living in a zombie-infested world.

What Type of Game is Dead Age 2?

Dead Age 2 is an ambitious game, which seems to fall into several genres, on one hand, you’ve got the old Final Fantasy style combat system, mixed with This War of Mine base fortifications and resource management to top it all off and keep your survivors alive to see tomorrow.

There have been so many times where I have seen games like this try to pull off multiple mechanics and have either massively over-complicated things, making the game less enjoyable or even too difficult, but in fairness, Dead Age 2 has pulled it off very well, with each aspect of the game being just as crucial as the others.

Firstly, I will start by saying you don’t need to have played the first Dead Age to pick up number 2, the game’s premise is fairly simple, the world fell apart and we’re just trying to survive, one day at a time.

Don’t get me wrong though, simple doesn’t mean easy, there are several types of enemies ranging from a wide variety of infected to humans out to hurt or rob you.

When you first start Dead Age 2 there are a number of options you can change, from some appearance customization to more important changes such as skills with certain types of weapons or the ability to create medkits.

Depending on how you spend your skill points will change how you approach fights at the start of the game. For example, you can put two points into melee combat, which means you will excel in close-quarters combat, but you would be missing out on ranged abilities, so choosing wisely is key to survival.

Each encounter you face imposes a new challenge, that could be an army zombie with heavy armor or a screeching zombie which causes your character to run in fear and miss a round.

Surviving the day times, scavenging, and fending off both humans and hordes is only half the game, the other half features a resource management style of gameplay, where players must explore their surroundings in an attempt to scavenge and keep their base full of supplies.

Once you have gathered enough resources, you can use these to start building up your base, which will make survival easier in the long run.

Things such as beds can be improved, which will increase the amount of healing each character receives in the morning, or the barricades at the front, stopping attacks from being as deadly.

Players can use the comms room to help them explore their surroundings, allowing them to locate more resources, which of course, might end up in a fight to obtain.

There are also other factions to be aware of in Dead Age 2 as well, at the start of the game your standing with these factions will be natural, but each decision you make can alter that, changing how these factions interact with you, be that hostile or friendly.

Dead Age 2 is a much better game than I had anticipated, on first look, it seems very simplistic, which couldn’t be further from the truth.

Dead Age 2 is a detailed, well-thought-out game, which both rewards and punishes your decisions accordingly, its round-based combat system made me feel both, nostalgic and impressed with its own personal touch on the genre.

While it’s not going to be making it to the hall of fame of gaming titles, it’s a very solid game, which has clearly had a good amount of thought go into it to ensure it stands out from the overly saturated zombie genre. 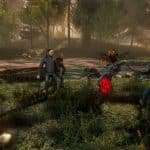 Price: $17.99
Buy Now
Game title : Dead Age 2
Game description : Dead Age 2 is a mixture of resource management and turn-based action, which adds its own unique spin to both genres. Explore and scavenge by day and upgrade and defend at night.
Unboxed Reviews