Earlier in the year, I was lucky enough to be invited into the Chivalry closed beta in order to do a pre-release Chivalry 2 review, which I had an amazing time playing.

Now that Chivalry 2 has been released, I couldn’t wait to get stuck in and see what was on offer for the game’s full release, it didn’t disappoint.

The sheer epicness of the large-scale multiplayer battles is incredible, and with the game being cross-play enabled, there won’t be a shortage of players either, meaning you’re going to get a full, blood-soaked battle every time you play.

Medieval warfare has never been so fun, or comic for that matter since I didn’t play the original game, I was taken back with laughter when my and other players’ characters started blurring out comical lines in the midst of battle.

Chivalry 2 is jam-packed full of game maps and modes, from sprawling castle sieges to combat in the pits, players can choose from 64 players, 40 players, and free for all game modes.

Players can throw themselves into a random game, which will be mixed modes and could be any of the maps listed below at random.

At the moment there are 8 maps for players to enjoy, however, a new huge free content update has been promised, which should also include new maps and modes into the game.

Each of the maps listed above is incredibly unique, offering a distinct set of tactics during each battle, some of which require players to work together to beat opponents via objective play, while offers just require brute force to overcome the enemy.

During the closed beta of Chivalry 2, there was a decent amount of customization, in fact, enough that I would have been happy enough with that being the level of customization in the main release.

But no, the full release has taken it up a notch, with the ability to not only completely change the look and gender of all your character classes but also an extensive list of weapons and armor for your to change too.

As well as a long list of weapons and armor, there are different skins for each too, for example, you might like using a Kriegsmesser as pictured above, but then you can unlock 5 different variations of that weapon, really allowing you to make this character your own.

I’ve started making all my classes wear the same armor patterns and having a mix of men and women to really mix my team up a little bit, there is so much you can do, that I actually found creating my loadouts really enjoyable.

Playing Chivalry 2 on my ultra-wide monitor is easily one of the most epic gaming moments I have experienced in years.

From the minute you start a siege or battle, having a commanding officer shouting words of inspiration and the crowd cheering and charging into the heat of battle, I felt like I was actually there, about to charge headfirst into hordes of enemies.

While there is a lot of decapitation and blood, I love the fact they have also managed to work some humor into the game too.

I’ve had many Monty Python moments where I have chopped someone’s arm off, just for them to continue coming at me with one arm, in fact, I think one of them shouted “Tis but a flesh wound”.

During one of the sieges, I even spotted a man climbing aboard a catapult to make his advance on the enemy that much quicker, and…Weirder.

Each siege has stages, all involving separate objectives, such as defending the gate or escorting siege towers, of course, these alter depending on if you are on the defending team or attacking.

From the very second you are thrust into the action in Chivalry 2, it seems you barely get a moment to compose yourself, as the fighting engulfs you, but this is not just a typical multiplayer first-person slasher, you need to choose when and where to place your hits.

Depending on the situation, you will need to use a variety of different attacks, which can be controlled further with your mouse or controller, as you swing, you can move your mouse to alter the course of the blow, making the combat much more about timing and skill, than it is about hack and slash luck.

The only issue I have found when playing Chivalry 2 is the sheer amount of players who are so desperate to get a kill, they will jump in front of your weapon so they can kill the person you are fighting, I actually had 2 guys moan at me because I team killed them, as they ran in front of my already swinging axe.

But in fairness, in a game with friendly fire on, which I agree it should be on, for realism, you’re bound to get the odd friendly kill mishap, I’m sure it even happened back in these battles in real life too.

If you’re not fond of blood and guts, or people without heads on their shoulders, don’t play this game, or play it with your eyes shut?! There is a metric ton of blood and just as many limbs laying around the battlefield.

As you can see from the gallery below, it doesn’t matter which map or mode you are playing on, the end result is always going to be a bloody battlefield laden with bodies and limbs all over the place.

Losing a limb doesn’t mean the end of the game though, while you’re not Ethan Winters and can’t magically grow limbs back, you can continue to battle with just the one arm or leg, seem familiar?

Chivalry 2 is an absolute delight to play, it strikes the perfect balance between edge-of-your-seat action and silly humor, keeping it from being too serious.

Torn Banner Studios have also promised a free content update soon, which is expected to increase the overall scope of the game, which in my eyes is better than anything I could have expected already, without the upcoming content, which will surely bring further improvements and enjoyment.

At first, I had been concerned that the game might become boring quickly, but with the new content since the closed beta, as well as the level of detail in the customization, Chivalry 2 has become one of my favorite game releases for this year.

The only thing I would like to see added to the game is mounted combat, and jousting tournaments, adding mounted events, or the ability to earn mounts, and keeping them somewhat balanced could be a difficult feature to achieve, but I’m hopeful that one day we will get that.

I would love to sit here and write more about this amazing title, but sadly I’ve made myself a new nemesis whom I must get back into the battlefield and decapitate, I hope to see you all in the heat of battle soon. 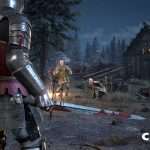