What is BROK the InvestiGator?

BROK the InvestiGator is a hybrid of traditional adventure and side-scrolling beat ’em up, with cool cartoon graphics. The currently playable and free prologue of the game sets the scene for the upcoming main game itself.

You play as Brok, the alligator detective, who is haunted by his troubled past. As far as adventure games go, BROK the InvestiGator has a much deeper story than I had ever imagined it would. In fact, there were a few moments where I found myself feeling sorry for Brok.

At the moment, while the game is still in development, we only have access to the first chapter of the game, but I’m loving what I am seeing so far and can’t wait to dig into Brok’s life a little deeper.

You might be wondering how BROK the InvestiGator has difficulty settings. Most point-and-click type games are simply story-driven, and your power of observations is the only thing that affects the difficulty.

Well, this is where BROK the InvestiGator has been separated from the norm. There are two modes you can switch between, the standard point and click mode used to identify objects and progress in the story and a fighting mode, which allows you to attack objects and people.

Within a few minutes of playing, you are taught how to use the combat controls, which thankfully can be picked up very quickly without the game needing to hold your hand.

Of course, don’t expect any Tekken style of crazy fighting. This is still an adventure puzzle game essentially, but that being said, the combat adds a really nice touch to the game, which I personally enjoyed.

Once you have gone through the initial training and get into the main game itself, you will get opportunities to level up your fighting skills and earn some XP.

When you start working on cases you will get clues, which will help you to piece everything together. You can check them at any point in the game to help you overcome your current objective.

The point-and-click adventure side of the game is where it really excels. While the fighting is a great addition to the game, I personally think it could use a little improvement. But as mentioned above, the game is still in development, so what we’ve seen so far is just an unfinished teaser.

As with many of these styles of games, it’s important to keep an eye on your surroundings. There are many situations, where objects are required to progress further into the game, but in most cases, these were not too difficult to find.

Point and click games, if I’m being totally honest have never been my kind of thing. But Brok may have just changed that for me. I know I likely spend longer than others to find items and solve puzzles, but I had a blast doing so and will definitely be buying the full game when it is released. 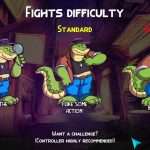