Before We Leave Review – A Unique Take on a Saturated Genre

Have you had a chance to play Before We Leave? If not, or if you’re debating whether it’s worth your time, let’s make your decision easier with our Before We Leave review.

Before We Leave is one of the most chilled-out games I have ever played, with its hexagonal building design and emphasis on relaxing gameplay, I can happily sink myself into a comfy sloop and mindlessly build my city for hours.

As with many city builder games, you can speed up or slow downtime, so you can go at your own pace, if you wanted to blitz through the rather simple tech tree, you can do it. But there is honestly no need to, as there is no emphasis on time, it somehow reminds me of Animal Crossing New Horizons, everything can be done at your own pace, without penalty for going too quick or slow.

The graphics are a little cartoonish but in a good way. For some reason every time I see one of my townsfolk I think of Terrance and Philip from South Park.

One minute I can be looking at the game, wishing there was a little bit more detail, the next minute I find myself looking at my town with the sun setting in the background, thinking it looks amazing.

What Makes Before We Leave stand out?

Steam is saturated with city builders, from popular giants such as cities skylines to one-man-band games such as Kingdoms Reborn. While they seem to be hit or miss, in honesty not many of them are unique enough to stand out from the crowd.

Before We Leave is a very unique city builder. Firstly its core gameplay is so simple actually works in its favor, it hasn’t tried to reinvent the wheel, it has simply given us a solid, fun, but chilled-out game.

You can of course work on improving logistics, placing better paths to make sure supplies get around quicker, but in honesty, it’s not going to affect you too much if you don’t.

Before We Leave threats & dangers

One of the other things that make Before We Leave so different is the lack of threats. There are no AI that can cause you harm, no opposing armies, the entire game is chilled, with no worries or threats.

Apart from a giant world-eating space whale, you have nothing to concern yourself about, just rebuilding the world after the fall of civilization, using the environment around you to collect resources and rebuild.

Much of the games premise involves exploring, building ships and finding other islands, as well as rebuilding spaceships to explore other planets and continue off world expansions.

Each island or map, has its own set of unique environments, meaning that certain buildings such as the orchard can grow in one environment, but not another. So in some cases, you might struggle with resources until you’ve managed to secure more land.

With multiple islands and planets, micro-management becomes pretty tough in Before we leave, but thankfully you can build shipping lanes, which will help you to move your goods around, from one island to another.

When you finally make the first big step for mankind and start to colonize another planet, you can also create space shipping lanes too, allowing you to move goods from your islands on one planet to another.

When setting up shipping lanes, players can choose between manually sending good, or setting up permanent lanes, which can carry multiple items between islands.

You can set a target limit for the number of goods to be shipped, or simply leave it as an infinite amount, with each island having its own environment, it makes sense to have each island prioritize certain goods and simply ship them around between your islands.

Before We Leave Summary

While before we leave is simple on paper, as your progress in the game, resource management, keeping several islands and planets running smoothly and peeps happy becomes a tough challenge.

In fact, before starting the Before we leave review, I had seen there was no real threats, no aggressive creatures or AI, and that we would be playing entirely alone, in this expandable universe, with this in mind I had low expectations, which I was overjoyed to see we’re exceeded by an outstanding game.

It’s fantastic watching your islands build up, from your first island with a few peeps popping up out of their bunker, all the way up to an intergalactic trade hub, bustling with life.

Before we leave is the perfect game to unwind to, even though it’s a chilled out game, there are still challenges that make it more interesting, but often with these games we see challenges that honestly become more of an annoyance than fun, I didn’t find that to be the case with Before we leave.

Before We Leave Review: PC Specifications

If you haven’t already figured from my Before We Leave review, I really am enjoying playing. I highly recommend trying it and at its current price, Before We Leave is a bargain.

Buy Before We Leave 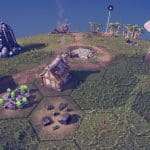 Game title : Before We Leave
Game description : Before we leave is an ultra-chilled city builder where players must manage multiple islands and planets after years of sheltering in a post-apocalyptic world.
Unboxed Reviews