When Atlas was first announced, I must say, being a fan of Ark, I was excited not only to play, but also to complete an Atlas review.

However, after playing, I decided to hold off assuming that the game was simply off to a rocky start, and simply needed a few updates before it would improve.

It’s now almost a year since the release and whilst there has been changes, in my mind it’s already too little too late.

The game starts you off on a Freeport, safe and free to craft yourself a raft to get yourself adventuring onto the high seas.

Here in lies the issue, the map is HUGE, and is made up of several cells that span 45,000KM and holds up to 40,000 players across 700 unique islands. Sounds great? Would be if you could actually settle on one of those islands.

With such a huge map I thought to myself, it will be a breeze finding an island to call home, how wrong I was.

What makes it worse is the distance between these islands, you can literally sail for hours (real hours not in-game hours) before you find land mass, simply to find that it’s already been inhabited by a well established unwelcoming company.

However, Atlas took it too far in my opinion, bringing in the need for vitamins as well as basic survival functions. This means that simply preparing food and drink before a voyage may not be enough if they do not contain the correct vitamins to keep you going.

I personally found that vitamin D obtained from fish was, ironically in a game surrounded by ocean, the hardest of all to obtain. Firstly just to simply fish you need to reach tier 3 in tool making.

With Ark there is a basic rule of survival. You start on an easy beach, and the further inland you go, the harder the creatures will become. Atlas seemed to have ignored this rule.

Often as a newbie I have docked up at an island simply to be met by a ridiculous level creature that has ripped me apart. There doesn’t appear to be order to it, in some ways I can see how this can be more interesting, but in practice as a new starter, it’s bloody annoying.

You may think that staying on the water will keep you safe, you would be very wrong. From storms to Ships of the Damned, there is plenty out there to keep you from being safe.

Another thing to note about Atlas, if you are a solo player, whilst you can play solo, I wouldn’t recommend it.

Have you ever seen a pirate crew with just one captain? No, me neither. There is a good reason for it. You’ll need to man the ship, adjust the sails, load the cannons, etc.

Whilst my Atlas review has been pretty dire, there are some good points to the game. The open sense of adventure is frankly unrivaled, in theory and principle the game has serious potential.

However, it appears to be untapped potential. The scenery is undeniably stunning, but there’s more bad points than good at this stage. Unfortunately, I don’t foresee this changing much either.

Spread the love
Tags: Pirates
Summary
A game that confuses emotions, filling you with both joy and misery all at once. On the one hand, you get to captain your own ship and crew and voyage into this gigantic open world of sea and wonders on the other hand, you will be doing it for hours without finding land, or much adventure or simply dying without fault of your own and loosing everything. A highly criticized game that could and should have been so much more than it is.
Good
Bad
4.1
Poor 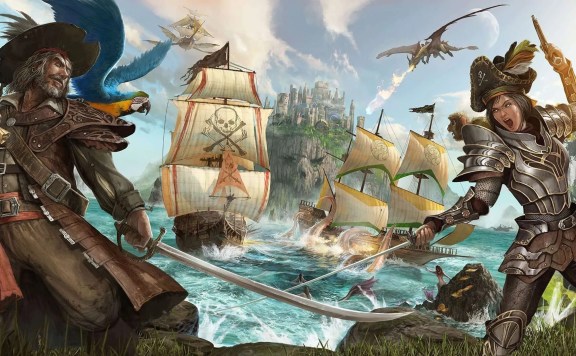