Have you ever dreamed of running your own 90’s style arcade? Well now you can, or at least you can once you’ve done your laundry.

While being forced to run your dad’s laundromat, before long you realize that there is a back room, filled with arcade machines. And, as a young teen bored to death, what do you do, play on them? Of course, a little, but more importantly, make money from them.

Arcade Paradise offers the perfect dose of ’90s nostalgia, letting you not only build your own arcade but also enjoy tons of retro games too.

In the first few minutes of Arcade Paradise, you wouldn’t know you was about to embark on a journey to building your very own arcade paradise, which is a good thing, as cleaning and drying clothes can get just as old as doing it in real life.

But washing clothes and keeping the laundromat running smoothly does help you make income quickly, which helps you expand your arcade empire quickly.

Even after you have started to build up your arcade room in the back of the laundromat, there are still customers bringing in their dirty laundry. But as you start to purchase more arcade machines, you can quickly start ignoring your laundry duties and focus more on your gaming empire.

Picking Up The Trash

To earn money in Arcade Paradise, which you’ll need to upgrade your arcade, you need to perform various tasks. These range from collecting and throwing out the trash to emptying the coin hoppers.

It sounds pretty trivial, and at first, I wondered if a game like Arcade Paradise could draw me in. Let me tell you something, it really did, and I never imagined picking up trash would become so addictive. There’s even a mini-game where you need to throw the bags into the dumpster and hit the target to earn extra coins.

Aside from cool arcades and mini-games, though, is the fact that you need to run the laundromat to begin with before expanding. This involves customers dropping off their laundry and you putting it into the washing machines. Once the washing is done, you’ll need to be quick to dry it, then retrieve it and put it on the side. If you’re too slow, your score will go down.

This whole aspect had a strange Crazy Taxi feel to it, where nostalgia seeps into what really is a commerce-style game. The ultimate goal is to make money, but it’s carefully painted with a retro brush that makes it incredibly endearing.

After the small introduction to Arcade Paradise, you’ll soon be guided to the back office where you’ll see a 56k. Here you can chat with your friends via the messenger app, purchase new arcade machines, and expand your horizons.

Each arcade cabinet is fully playable and you can earn in-game rewards for playing on them. It’s surprising how quickly each game can suck you in, transporting you to a completely different world where you forget you’re in a laundromat.

With over 35 arcade games available, it doesn’t feel like Arcade Paradise made the arcades an afterthought. Each game offers hours of fun, from 32-bit classics to retro 90s games.

But, as you progress, the laundromat definitely feels more like a burden. Sure, it’s fun for a few hours, but the monotony soon creeps up. Thankfully, you don’t have to pay any attention to it if you don’t want to. Forgot to pick up the trash? No problem. Not going to wash customers’ clothes? Meh, who cares! Passive income in Arcade Paradise means you don’t have to play every aspect of the game. Soon you’ll be unlocking plenty of upgrades that offer more assistance in that area anyway.

Arcade Paradise is a truly addictive game that’s both casual and satisfying. There are tidbits of different types of games, like management, sim, and retro, all rolled into one.

But ultimately, this game is about succeeding in what you love. It offers an immersive visual presentation, playable arcade games, and a fun soundtrack that I’ll be returning for more of. 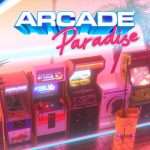