Both Assassin’s Creed and Vikings are two things that I have always been a big fan of, so you can imagine how excited I was to find out there was going to be a Viking version of Assassin’s Creed, AC Valhalla.

The first thing I noticed with AC Valhalla was just how stunning it is, playing on an Xbox Series X I have to say, it is one of the most stunning games I have played to date.

The level of detail in AC Valhalla is unlike anything I have ever seen before, you notice this more so when you land on the shores of England and see the lush environment.

The first thing to note about AC Valhalla is that the game is long, extremely long, in-fact with most games I try to be a completionist, but I have given up with this on Valhalla, due to its overwhelming size.

Not only is the game huge, at around 40 hours, if you don’t stray from the game’s main story. The map is massive too, which explores the UK landscape and changes the further up north you go.

Having a game with so much to do has been very welcomed this year, especially with Covid restrictions in place. Games like AC Valhalla have been a great distraction from the world.

The side missions are remarkably entertaining too, so I wouldn’t recommend skipping them. I’ve had some genuine laugh-out-loud moments with some of these missions.

A good example of these “lol” moments is a random Dane, ironically named axehead, due to, well the giant axe in his head. The only thing this missed, was Axehead stating “Tis but a scratch” to make it the perfect gaming scene.

The combat in AC Valhalla is incredibly fun, and while you can obtain better gear and add new skills to make combat easier, there are plenty of challenges to knock you back down a peg or two.

As with older Assasin’s Creed games, there are outposts you can conquer, many of these will also offer books of knowledge or new gear, making capturing them not only fun but beneficial too.

When talking on a heavily guarded outpost, you can choose your approach, either stick to the shadows and kill like an assassin or go full Viking and defeat them head-on.

One thing that I was a bit disappointed about within AC Valhalla was the lack of ship battles. I loved taking on enemy ships in Assassin’s Creed Odyssey and was hoping to see more of that in Valhalla.

Don’t get me wrong, there are ships, and sailing them across the rivers all along the UK is great, but you don’t bump into other ships for battle like you did in Assassin’s Creed Odyssey.

The skill tree in AC Valhalla is another great improvement to the series, with so many perks to choose from, which seems to expand all the time with updates.

You can choose to auto-assign skill points, but personally, I find it pays off to look at the skills in great detail and plan routes to skills that will readily aid your particular play style.

Each skill that you spend increases your overall power, which can be used to identify how easily you will be able to defeat certain enemies.

As with Assassin’s Creed Odyssey, there are also cult members you can take on, many of these will have their own power level, so you can identify what level you need to be before attempting to safely take them on.

The level of detail to customization has always been impressive in the Assassin’s Creed series, this was pushed further with Odyssey giving us the ability to choose between a male or female protagonist, but now, AC Valhalla has pushed it even further.

You can now customize your character by adding tattoos, these can be added all over your body and face, you can even pick up more by finding designs out in the world, or buying them in Reda’s shop for Opal.

But your body isn’t the only thing you can customize, there are also tons of Assassin’s Creed Valhalla ship designs you can purchase, either with in-game currency or real money.

It wouldn’t be a modern Assassin’s Creed without a companion, and there are so many to choose from, and with more that can be added from either Reda’s shop or with real money.

If you have the patience, you won’t need to spend any real money to obtain new customizations, each week Reda obtains new tattoos, companions, weapons, armor, and ship designs, if you can save your Opal and wait, you can get anything for free.

Finally, you can also customize your town, AC Valhalla is the first Assassin’s Creed game to include a customizable settlement, which you can decorate and expand as you play.

Another way that Ubisoft has managed to keep the game’s already massive content expanding, is with the addition of seasonal events, such as the upcoming Sigrblot Festival.

Each of these events offers new and exciting ways to unlock new skins or gear, and include new content and quests to expand your Viking experience further.

You will also find these events often offer new customizations and statues for your settlement, which can really help to make it stand out.

Of course, it wouldn’t be a Viking game without river raids, and while I still don’t get those ship battles I crave, they do offer a slice of Viking mayhem and brutality which more than makes up for it.

There are two types of river raids, the random towns, monasteries, and outposts, which you stumble upon while you are out and about in England, and the mission-based river raids, which take place in a dedicated instance.

At first, I found these river raids all a little too easy, but don’t worry, they become much harder as you progress through Valhalla, with some of the games later river raids being extremely difficult.

AC Valhalla was a game I was already excited about before launch, Assassin’s Creed Odyssey was one of my all-time favorite games, so I had high hopes, it was nice for once not to be disappointed.

I have never felt so dedicated to a game before, pushing myself to become a completionist, trying to get every single piece of armor, book of knowledge, and side mission completed, while also working hard to purchase statues and expand upon my settlement.

The seasonal events keep me coming back for more, in fact, there have been a few times I have taken breaks from playing AC Valhalla, but before too long, I get an email about an upcoming seasonal event and I’m straight back into it again, getting drunk and having a fistfight with some fellow Vikings.

If all this isn’t enough for you, there are weekly and daily quests, legendary animals to track and kill across several countries – there’s never a shortage of things to do in AC Valhalla.

I might be a little late to my AC Valhalla review, but that has been down to having so much to explore, and enjoying the game so much, that I wanted to play it to its fullest, before committing to a review. 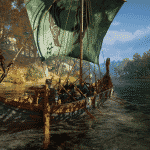