The Valkyrie Initiative is a Russian-based development team. They’ve opted for a unique twist on the traditional FPS genre with a story-based attempt.

Sci-fi fans would likely take a look at 41 Hours and think it’s something they’d easily be sucked into. There’s everything on offer, from Zombies to Aliens.

The small amount of gameplay offered in the 41 Hours Prologue certainly offers a lot of potential. It’s clear what this dev team is trying to achieve, but it’s just not quite there, yet.

At first glance, the 41 Hours Prologue game is pretty stunning. When you jump in, you’re quickly introduced to Ethan, 41 Hours’ protagonist, and his wife Clara.

You’ll notice that there are a few spelling mistakes and grammatical errors. It makes it hard to connect with this comic book style feel they are clearly attempting to achieve. While English isn’t The Valkyrie Initiative’s primary language, this can be somewhat excused.

The war-battered landscape feels really refreshing. There’s an emphasis on beauty in this desolate landscape that is quite endearing.

It actually felt like the environment wasn’t yet finished. Navigating through two-story houses was complicated enough without repetitiveness.

Clearly, a lot of hard work has been put into the outside environment. This is, unfortunately, let down by what feels like laziness on the developer’s behalf. But, once again, I have to remind myself that this is only the 41 Hours Prologue.

The medium of the game is certainly something different. I was expecting more if I’m honest, but the narrative lacks a lot at this point in time.

The story of 41 Hours is told via the format of comic strips. Being dumped straight into the game with no context whatsoever is confusing.

Perhaps it’s just because we’re only seeing the preview of 41 Hours. I’ll give it its due, the story is intriguing and I want to know more, but it’s just not offering enough in its current state.

Bugs are often found when a game is released. But with 41 Hours, it feels like an ants nest.

You can command Lea to navigate to a specific area. The area will turn blue if it’s accessible and red if it’s not. Nearly every time I’ve tried to do this in a blue area, Lea tells me she can’t go there.

There’s a distinct lack of gravity in 41 Hours. Ethan’s telekinesis ability is menacingly frustrating. Rogue boxes fly around the environment, making it almost impossible to pick them up.

Ethan’s cloaking ability offers huge potential. You can make yourself invisible as long as you have the energy to do so. Here you can sneak past enemies and infiltrate bases quite easily.

However, rather than offering a sneaky takedown method of attacking someone, you have to start shooting to deal any damage. Of course, this attracts attention rendering the cloaking ability pretty useless.

I also found it very odd that I could run into some soldiers with the cloak enabled, for them to simply act like nothing was there, I understand Ethan is invisible, but hoped it would have worked more like the cloak in the predator, making Ethan still venerable unless using the cloak tactically.

Right now, 41 Hours is not in a state where it’s enjoyably playable. There’s a long ride ahead of us to see this game turning into something spectacular.

I honestly hope we see more from this dev team working on 41 Hours. Due to release on April 29, there’s a lot of work to do. 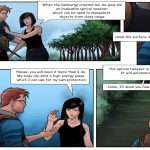